FOX 29's Jeff Cole has the latest on the GOP Senate race.

Former President Donald Trump blasted the state's elections procedures on social media Wednesday even though there are no indications of any wrongdoing with those ballots other than a printing error that was slowing the tally in one county. He has relentlessly criticized the state's voting procedures since his loss in Pennsylvania two years ago, when it took several days to tally the results from all mailed ballots.

The head of the state association of county commissioners, the local officials who oversee the nuts-and-bolts of Pennsylvania voting, described Tuesday's primary as "a very smooth election day" but acknowledged that the state’s 2019 law expanding the use of mailed ballots could be improved.

Until 2019, Pennsylvania allowed only limited voting using mailed ballots. Voters could receive an absentee ballot only if they could show a medical problem, planned travel or some other complication that would prevent them from voting in-person on Election Day.

A legislative deal that year put an end to straight-ticket voting, a priority of Republicans, in exchange for allowing anyone to request a ballot in the mail, a change sought by Democrats. 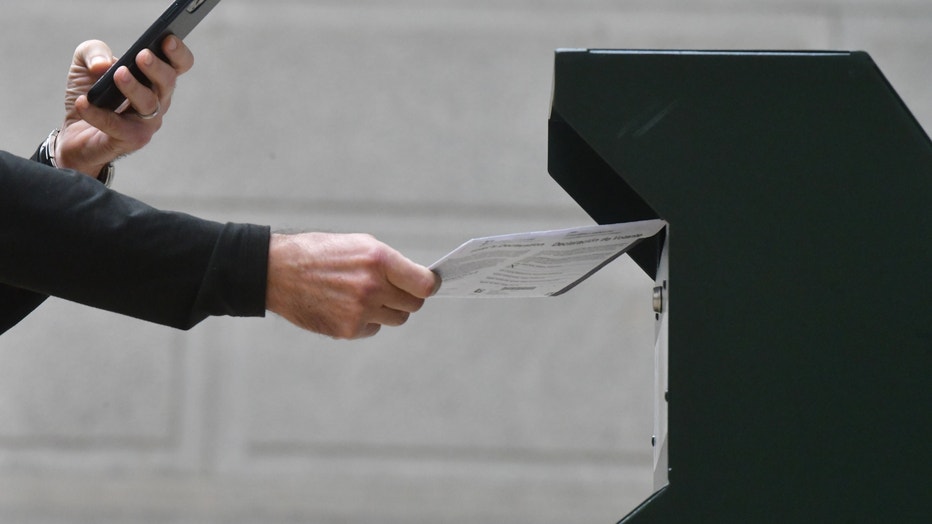 PHILADELPHIA, PA - OCTOBER 27: A man photographs himself depositing his ballot in an official ballot drop box while a long line of voters queue outside of Philadelphia City Hall at the satellite polling station on October 27, 2020 in Philadelphia, Pe

The mailed ballot expansion left in place the longstanding procedures for absentee ballots. But the pandemic brought much wider use of mailed ballots than anyone had anticipated, as voters sought alternatives to casting a ballot inside crowded precincts.

The state Supreme Court in 2020 allowed more ballot collection boxes and extended the period when mailed ballots would be accepted to three days after the election as long as they were mailed by Election Day. Those changes, which were temporary, fueled Trump’s claim that mailed ballots provided an opening for widespread fraud, but there is no evidence that occurred.

County officials throughout the state have been calling for changes to the 2019 law. One major problem is that it does not allow counties to begin processing mailed ballots before Election Day. Getting a head-start would allow local election workers to identify errors ahead of time and get the properly marked ballots ready to be tallied.

Not allowing that early processing creates a huge backlog of ballots to process just as local election officials have to turn their attention to Election Day voting. That creates a delay of several days — or longer — for counting mailed ballots.

Both parties generally agree the law should be amended to allow early processing of those ballots. That hasn't happened, in part because of disagreements between the Republican-controlled Legislature and Gov. Tom Wolf, a Democrat. How much time should be allowed to receive ballots and how to address issues such as signature verification and drop boxes are among the contested changes.

Republican lawmakers have proposed linking early canvassing to a host of other election law revisions they want, including tougher voter ID requirements, changes Democrats do not support.

WHAT TRUMP IS SAYING ABOUT MAILED BALLOTS

Trump, who endorsed Oz, posted on his Truth Social platform Wednesday that Oz "should declare victory," arguing that "makes it much harder for them to cheat with the ballots that they ‘just happened to find.’"

Oz has not taken that advice and made no public statements on Wednesday.

In another post, Trump said, "Here we go again! In Pennsylvania they are unable to count the Mail-In Ballots. It is a BIG MESS. Our Country should go to paper ballots, with same day voting."

He was likely referring to a problem in Lancaster County, a GOP stronghold in the heart of Amish country. County elections officials said a company that printed its mailed ballots included the wrong ID code, which prevented scanning machines from being able to read them. The issue involved at least 21,000 mailed ballots, of which only a third were scanning properly. The slow but painstakingly detailed process of transferring the votes to fresh ballots that can be scanned is underway.

Trump takes a heightened interest in Pennsylvania because it's one of the most important presidential battlegrounds and voters are split fairly evenly between Democrats and Republicans.

Eight states allow all elections to be conducted entirely by mail. This includes Republican-led Utah, where all-mail election have been in place statewide since 2019 and no major problems have been reported.

In those states and others, numerous safeguards are in place to ensure that people casting mailed ballots are who they say they are and vote just once. Pennsylvania counties have successfully counted mailed ballots during every election in which they have been used.

There has been no evidence of any widespread fraud or conspiracy to steal the 2020 presidential election despite claims pushed by Trump and his allies. Numerous judges, including Trump appointees, dismissed lawsuits filed over the November 2020 election.

A group of federal and state election officials issued a statement calling the 2020 election the "most secure" in U.S. history. And an exhaustive review by The Associated Press of every potential instance of fraud in the six states disputed by Trump, including Pennsylvania, found nowhere near enough cases to affect the outcome.

There is nothing suspicious about this. Tallies reported by election officials on election night are unofficial results. Those totals will change over time, particularly as mailed ballots are verified and counted. Local election offices have stringent procedures to ensure that every valid vote is counted.

It can take weeks to certify an election -- the point at which all results are final. In states that allow election officials to pre-process and even pre-scan mailed ballots, results can come quickly.

Some states allow mailed ballots to be accepted if they arrive a few days after the election, as long as they are postmarked by Election Day.

Several states also allow for a period after the election for voters to correct technical mistakes with their mail ballot, such as forgetting to sign it. Once these are fixed, the ballot is counted and added to the totals.