WASHINGTON - As new daily coronavirus cases reported in the United States surge to record highs, the U.S. surgeon general shared an impassioned plea for Americans to follow recommended guidelines in order to prevent further spread of the virus.

“I’m pleading with your viewers. I’m begging you,” U.S. Surgeon General Dr. Jerome Adams told “Fox & Friends” in an interview Monday. “Please understand that we are not trying to take away your freedoms when we say, ‘Wear a face covering.’ We’re not trying to take away your ability to go out when we say, ‘Keep restaurant capacity under 50%.’ We’re saying if we do these things, we can actually open and stay open.”

RELATED: Guidance for masks in schools varies widely across US states

The number of confirmed COVID-19 cases in the U.S. per day has risen over the past month. The country saw more than 70,000 new coronavirus cases in a single day on multiple occasions last week, according to data compiled by Johns Hopkins University. States like Arizona, California, Florida and Texas have recently been forced to shut down bars and businesses as COVID-19 cases surge.

The U.S. currently has more than 3.7 million known cases of the novel coronavirus, though the real number is thought to be far higher.

Adams acknowledged he and other public health experts were wrong to discourage the use of face coverings early in the pandemic.

“We were wrong back in February and March based on the fact that we didn’t think there would be this high a degree of asymptomatic spread of coronavirus,” Adams said, adding that “once we realized that the science was different for this virus, we changed our recommendations.”

“Face coverings are a way that we can reopen and we can stay open. That’s what the science says,” Adams said. 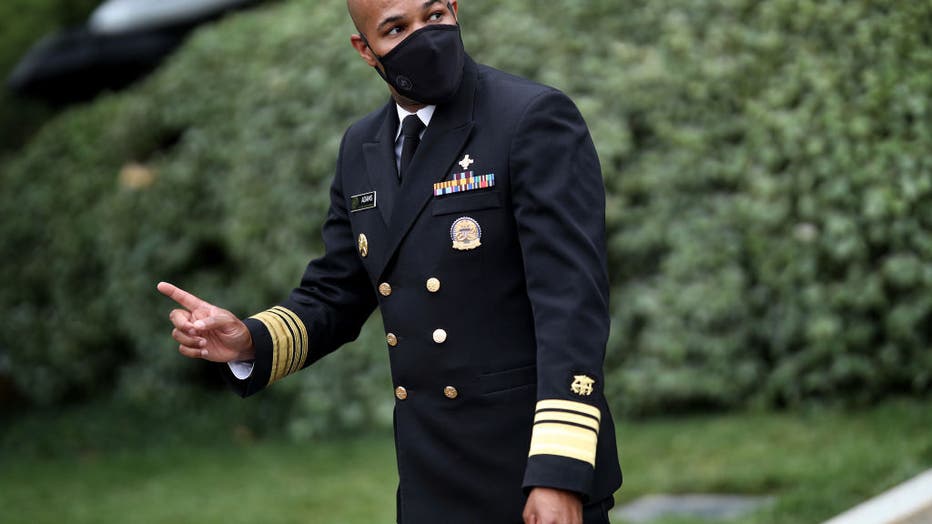 The surgeon general said the focus should now be on preventative measures, such as masks and social distancing.

“It’s important for people to know that we don’t want to rely on treating our way out of this problem. We really want to prevent the problem, and the power to stop this epidemic is in the hands of the American people,” he said.

Despite overwhelming scientific evidence showing the need for widespread mask usage, President Donald Trump has been slow to adopt the measure himself. He refused to wear a mask publicly for months, until finally donning a facial covering on July 11 during a visit to a military hospital.

On Monday, Trump posted an image of himself wearing a mask, writing in part, "Many people say that it is Patriotic to wear a face mask when you can’t socially distance. There is nobody more Patriotic than me, your favorite President!"

In a FOX News interview that aired Sunday, Trump pointed to other senior health officials, including Adams, who were slow to endorse mask-wearing.

Dr. Anthony Fauci, the nation’s top infectious disease expert, acknowledged in June that health officials wrongly advised the public in the beginning of the pandemic about mask-wearing due to concerns about a shortage of personal protective equipment among medical workers.

Dr. Tanya Selak demonstrates how her CO2 levels are within the normal range after having worn a surgical mask for six hours.

In the FOX News interview, Trump added that he is “a believer in masks” but stopped short of saying he would mandate them nationwide.

“I leave it up to the governors,” Trump said.

RELATED: ‘Wear a mask’: Doctor demonstrates how prolonged mask-wearing does not lead to carbon dioxide retention