'It's just saving lives': How you can join the Be The Match registry & help save the lives of cancer patients

FOX 29's Breland Moore details her personal experience donating plasma and stem cells to a cancer patient through Be The Match.

PHILADELPHIA - As journalists, we tell stories every day, but some stories change a reporter's life.

I didn't know it at the time, but this was mine.

About five years ago, I was working in Rochester, New York, and was assigned a story on a local high school bowler named Cameron Hurwitz.

His life was saved because of a bone marrow donation he received and that was the first time I had ever heard of Be The Match.

Cameron's story made an impact, so I took two minutes and signed up doubting I would ever get a call.

Fast-forward to October 2021 and everything changed when I received a text telling me that I was a match to a complete stranger that needed my help to save his life.

Naturally, my friends and family were curious and their number question was wondering what Be The Match even was.

Be The Match: How you can donate plasma, stem cells to help cancer patients

FOX 29's Breland Moore recently donated plasma and bone marrow stem cells to a man with cancer who she never met. She joins "Good Day Philadelphia" to discuss her experience and encourage others to join the registry.

"What we do is help people who have blood cancer disorders like leukemia, lymphoma, sickle cell," Gabrielle Morales, a Be The Match recruiter coordinator in the Delaware Valley, said. "For these patients, the only cure is to find a matching marrow or stem cell donor. Our job at Be The Match is to add as many people as possible to that registry to hopefully get a lifesaving match for our patients."

Finding a match is harder than it sounds, but signing up is as simple and painless as a cheek swab.

Unfortunately, there is a racial disparity in successful marrow transplants. 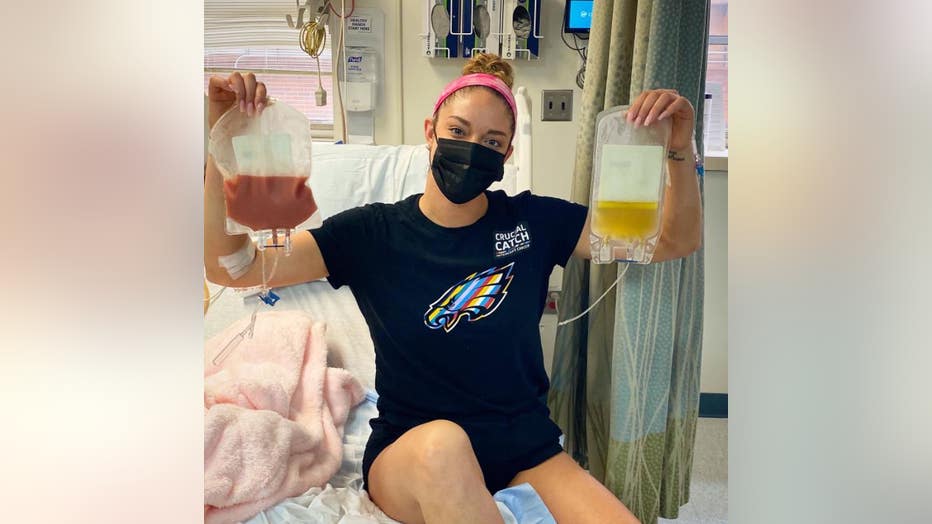 FOX 29's Breland Moore shares her personal experience donating plasma and stem cells to a cancer patient through Be The Match.

A Caucasian patient has a 79 percent chance of finding a match while Black patients have just a 29% chance.

Biracial individuals like myself have even less of a shot because there is not enough diversity in the database.

"Your donor is most likely going to be of a similar ethnic background because these HLA markers are inherited. So if there are less Black individuals, Hispanic individuals, Asian individuals on the registry, those patients of those backgrounds are going to have a much harder time finding a match," Morales said. "Unfortunately, a lot of people don't know about Be The Match unless they know someone who has been directly affected by blood cancer disorders. So it's our job to go out and let people know."

I made the commitment to be part of the solution and I can tell you, contrary to popular belief, giving bone marrow isn't that taxing.

About 80% of the time, a traditional marrow donation is not required. Instead, most donors, like me, do a Peripheral Blood Stem Cell donation or PBSC.

After a few blood tests to make sure I was healthy enough, I had a few days' worth of injections to stimulate white blood cell and stem cell production. Then I was off to Georgetown University Hospital in Washington D.C., one of Be The Match's flagship hospitals.

On the morning of the donation, I received my final injection and was then hooked up to a machine that filtered my blood. It took the needed plasma and stem cells out and then returned the rest back to my body.

After about four and a half hours in the hospital bed watching shows and socializing with staff, I was finished and able to come home to Philadelphia immediately.

Confidentiality rules prevent me from meeting my patient for a while, but I did have a chance to speak to Amanda Hathaway, a Langhorne resident who was on the receiving end of a PBSC transplant.

"They told me they found a 26-year-old woman in the United States and she was going to donate to me and I still get emotional about it," Amanda said. "I wrote her a letter saying, ‘I couldn’t tell her much about me except thank you' so I wrote her ‘Thank you for saving my life. You’re giving my kids a moan still. I need to be here for them because they're very young,' but when I actually see her in person I think I'm just going to cry."

There are no fees associated with donating and it was one of the easiest medical procedures I ever had.

"If it wasn't for Be The Match, I would be alive today," Amanda said. "I didn't even know about them and I feel like a lot of people don't because if they did they would sign up. It's not a hard process to donate or receive and it's just saving lives. Lives like me."