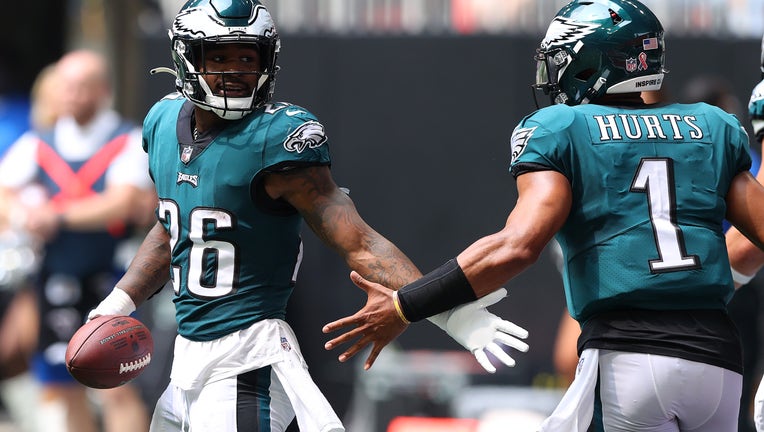 ATLANTA, GEORGIA - SEPTEMBER 12: Miles Sanders #26 and Jalen Hurts #1 of the Philadelphia Eagles celebrate after a two-point conversion during the second quarter against the Atlanta Falcons at Mercedes-Benz Stadium on September 12, 2021 in Atlanta, G

PHILADELPHIA - Jalen Hurts won over the city of Philadelphia with one outstanding performance.

Now he gets to play in front of a packed stadium at home for the first time knowing how well he played last week won’t matter. As he says often, "Rent is due every day."

"A game with electric fans, passionate fans, I’m looking forward to it," Hurts said. "Anywhere you go, you want to play at a high level."

Eagles coach Nick Sirianni was impressive in his NFL coaching debut. The 49ers present a tougher challenge. They’ll know more about Sirianni’s scheme than the Falcons did because the Eagles didn’t show much in the preseason.

Crowds at Eagles games and the effects on COVID-19 rates

"Practices were crisp last week, and we stepped on the field and were ready to play that game," Sirianni said. "If we don’t have good practices this week, we’re not going to be ready. It’s being in that mindset, that dog mentality to put yourself in position to go out and win the game on Sunday."

The Niners are coming off a 41-33 win at Detroit in which they had a 28-point lead in the third quarter. They were missing quarterback Jimmy Garoppolo in a 25-20 home loss to Philadelphia last October. George Kittle had a career-best 15 catches for 183 yards in that game.

The 49ers have rotated backs throughout coach Kyle Shanahan’s tenure with a different player leading the team in rushing each year. With Raheem Mostert out with a season-ending knee injury, that streak will increase to five straight years. Sixth-round rookie Elijah Mitchell stepped in for Mostert last week and became the first rookie not drafted in the first three rounds since Ronnie Coleman in 1974 to rush for at least 100 yards in a season opener with 104 yards on 19 carries. Third-rounder Trey Sermon should be active this week and Jamycal Hasty is also an option.

"They’re a good group," Garoppolo said. "They really are. They complement each other really well. It’s a little bit of different tastes with each one of them. They each have their own style of doing it, but it’s all effective. And I think with the O-line we’ve got, tight ends, fullbacks, even receivers blocking it. It makes for a good group."

The Eagles dominated the line of scrimmage against the Falcons as their offensive line was exceptional despite seven penalties. Left tackle Jordan Mailata had a crunching, highlight-reel block on a TD pass. Center Jason Kelce shoved aside two defenders on the same run play several yards downfield. Nick Bosa, Fred Warner and the rest of San Francisco’s defense won’t be so easy to push around. On the defensive side, tackle Javon Hargrave had two sacks and the entire unit put pressure on Matt Ryan.

Brian Dawkins joins Good Day Philadelphia to discuss his football career and his latest book "Blessed by the Best".

The Niners once again opted to stay on the East Coast between games to cut down on the cross-country travel. They practiced all week at The Greenbrier resort in West Virginia, where they spent a week last September between games. San Francisco also stayed on the road twice in 2019 and has won the second game on all three of those trips, averaging 41.7 points in those games. The Niners are glad to be back at a facility they've spent time at before.

"Any time you know what you’re getting into, I think it always helps," Shanahan said. "The unknown to me when you get off your routine is what messes guys up a little bit, but that’s why we like coming here. They do it awesome, but we also know exactly what we’re getting into."

Brandon Aiyuk wasn’t targeted once in 27 snaps in the opener despite coming off a promising rookie year when he led the Niners with 60 catches for 748 yards. Aiyuk was slowed by a hamstring injury in training camp and fell behind Trent Sherfield, who had two catches for 23 yards in the opener.

"Aiyuk’s been a little inconsistent because he’s been in and out with his injury," Shanahan said. "That’s what we felt was the best chance for us last week. Aiyuk’s still got a chance to get that spot up and not rotate as much."

WELCOME TO THE NFL

Eagles rookie receiver DeVonta Smith caught a TD pass and had a team-high 71 yards receiving on six catches in the opener. Fellow rookie back Kenneth Gainwell also scored a TD and added 43 yards from scrimmage.