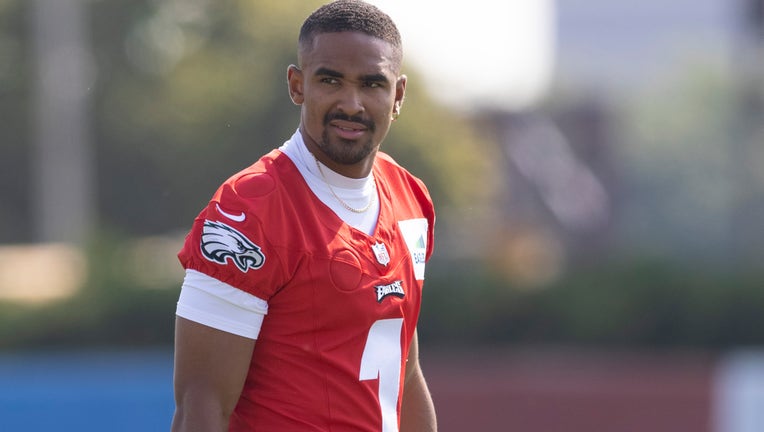 PHILADELPHIA, PA - JULY 28: Jalen Hurts #1 of the Philadelphia Eagles looks on during training camp at the NovaCare Complex on July 28, 2021 in Philadelphia, Pennsylvania. (Photo by Mitchell Leff/Getty Images)

That’s no surprise, though the team continues to be linked to Deshaun Watson.

"Have we done homework on quarterbacks that might be available? I mean, we have a short list," general manager Howie Roseman said Wednesday. "I think our job is to always evaluate every option at every position. We’re always constantly doing that and looking about what’s going on in the league. We do that before the draft, we look at next year’s draft classes at every position and try to figure out the strengths and weaknesses.

"That’s what we are doing during this time period. We’re watching tape on guys, we’re looking at guys and we’re making sure that we’re ready, one in case of injury, and also for any position that trades become available, being ready for that. I’m obviously not going to talk about anyone who is property of another team."

Since Hurts is still unproven and the Eagles have two first-round picks next year and a conditional first from Carson Wentz’s trade to Indianapolis, they’re often mentioned as a potential landing spot for Watson. His future is uncertain after he asked Houston for a trade in January before 22 women filed lawsuits in March alleging that he sexually assaulted or harassed them. Houston police and the NFL are investigating the allegations, but no charges have been filed.

"I think we talked about Jalen, and how he’s done everything possible off the field and during the spring practices to take the reins. We want to see him do that," Roseman said. "I think this is a big year for any player going from year one to year two. We’re excited to see that, and see his growth, and working with the ones. And hopefully that happens.

"One of the things that I always find kind of funny is whenever there’s a name bandied about, the Eagles are kind of associated with that. I understand because we have more draft picks, high draft picks, going forward that that’s probably going to be continual as players become available. We draft these guys for a reason. We’re really excited about the development of them."

Sirianni has preached competition at every position regardless of a player’s status since he was hired to replace Doug Pederson, who was fired three years after leading the Eagles to the team’s only Super Bowl championship.

The Eagles signed veteran Joe Flacco and Nick Mullens to play behind Hurts, who started the final four games last year after Wentz was benched.

"He’s working with the ones and he’s earned that because he’s worked his butt off," Sirianni said. "We’re hoping that he takes the reins and rolls with it and continues to just get good reps with the ones. I am so confident in Jalen. He’s a gym rat. He’s just thinking about football all the time, that’s what I love about him. He’s going to use those mental reps, that’s for sure. We just got to get him more reps out here on the field."

Hurts, a second-round pick last year, was 1-3 with an injury-depleted team that finished 4-11-1. He completed 52% of his passes for 1,061 yards and six touchdowns with four interceptions. He also ran for 354 yards and three TDs.

"I’m above it all," Hurts said regarding the chatter about the Eagles pursuing Watson or anyone else. "Control what I can. I’m here. That’s what I’m doing. Go out there and be the quarterback for this team."

Notes: LG Isaac Seumalo is week to week with a hamstring injury. ... WR Jalen Reagor was limited in practice because of lower body tightness. ... Roseman said 90% of players have received at least one COVID-19 vaccination shot.