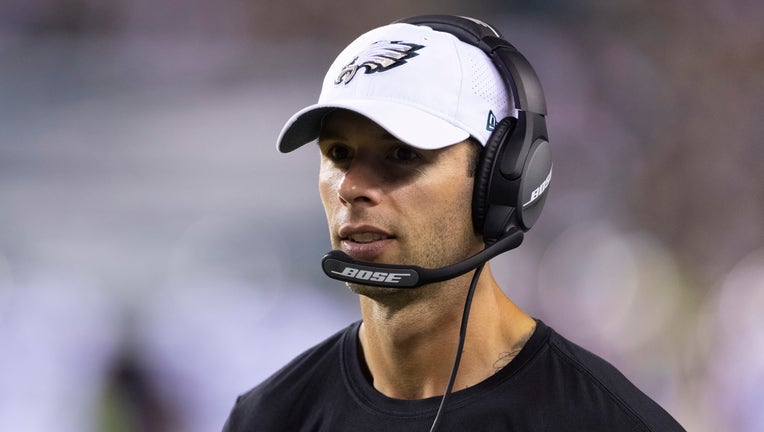 PHILADELPHIA, PA - AUGUST 19: Defensive coordinator Jonathan Gannon of the Philadelphia Eagles looks on against the New England Patriots in the second half of the preseason game at Lincoln Financial Field on August 19, 2021 in Philadelphia, Pennsylva

The Philadelphia Eagles’ first-year defensive coordinator presides over a unit that has allowed 851 yards and 76 points in a two-game span, excluding a touchdown Dallas scored on an interception return.

After a promising first two games, in which the Eagles allowed just 23 points to the Falcons and 49ers, Philadelphia is quickly sinking in league defensive rankings. The Eagles are 23rd in points allowed (26.5 per game), 31st against the run (150.3 yards per game), 27th in third-down percentage (opponents are converting at a 48% rate), tied for 26th in red-zone success (opponents have scored touchdowns on 78.6% of their trips), and tied for 28th in first downs allowed per game (25).

"Just because I like something, or the coaches like something, if the players can’t execute it, or it’s not the best thing for them, throw it away," Gannon said Tuesday. "The last two games, we’re continuing to figure that out as we go. And we need to figure it out fast. Because we can’t keep looking like that. I know that."

The Eagles are 1-3 heading into this weekend’s trip to Carolina to face the Panthers (3-1). Gannon's decision to play two safeties deep to guard against big plays has been heavily criticized in Philadelphia.

They defensive line has been manhandled by Dallas and Kansas City. Gannon is either unable or unwilling to adjust as the touchdown drives have mounted.

Gannon acknowledged that he needs to recognize when teams aren’t really trying to attack downfield in certain situations, and then set up his group to better handle the run. He said he is more impatient with himself than his players right now.

"We don’t really have a lot of guys making the same mistake over and over again. I think we continue to improve," he said. "My level of patience, it’s wearing thin on myself. ‘Hey, Jonathan, let’s get them in better position, so we give our team a chance to win the game.’ It’s not really toward getting irritated at the players. That’s how I’ll always roll, that’s how the coaches roll."

Monkey's Uncle gets you ready for Eagles gameday!

FOX 29's Jenn Frederick was live at the Monkey's Uncle in Doylestown, Bucks County to check out their store and get pumped for the Eagles game Sunday with new Eagles gameday gear.

Gannon’s most heralded player — six-time Pro Bowl defensive tackle Fletcher Cox — has been unproductive. Teams are double-teaming Cox, as usual. He recovered a fumble for a touchdown at Dallas, but has had no sacks and no tackles for a loss this season. He has five tackles, five hurries, no quarterback hits.

Gannon said Cox "is doing a good job right now," but that opponents scheming to stop him "do certain things that you typically don’t see (from those teams) on tape."

Kansas City rushed for 200 yards on 32 carries, six days after Dallas amassed 160 rushing yards on 41 carries. That’s almost 5 yards a carry. Stopping the run isn’t as important as it once was in the NFL, but it's problematic when teams can’t do it well enough to get an opponent in third-and-long situations.

The Chiefs converted nine of 10 third downs against the Eagles, who allowed an average of 7.4 yards per first-down play.

Gannon’s defense spends most of its time in nickel, with three corners and two linebackers. The Eagles play very little dime, which would add another defensive back and take away a linebacker. The Eagles’ linebacking group would seem to be the unit’s weakest link, but Gannon doesn’t see it that way.

"We’re not really a dime team right now," he said. "I just don’t believe in it right now, with who we are."

NOTES: Special teams coordinator Michael Clay joked that punter Arryn Siposs "is very sore" after not punting against the Chiefs. ... Clay replaced kickoff returner Quez Watkins with Jalen Reagor and got a 44-yard return Sunday. Clay said Reagor sparked the change, volunteering because Watkins was "a little banged up" when time came to return the kickoff.