The loss of smell and taste was one of the first recognized symptoms of COVID-19. Two years later, it remains one of the most common symptoms, with many people not regaining their full senses back for weeks and even months after recovering from an infection.

With COVID-19 unlikely to go away anytime soon, some researchers are concerned that as it continues to spread in the future, a significant number of people may face a long-term or even permanent issue. And losing a sense of smell — which then can impact the ability to taste — can have larger psychological impacts than some may realize, which one researcher described as "like turning off a light switch."

Dr. Rakesh Chandra, a researcher at the Smell and Taste Center at Vanderbilt University Medical Center (VUMC) in Nashville, Tennessee, was part of a team that surveyed more than 1,000 adult COVID-19 patients last year. They found that a majority — 73% — reported some degree of smell and taste loss or dysfunction, with the average case lasting 19.7 days.

Overall, 13.4% of patients studied reported having lost their smell and taste for more than four weeks, and notably, 10.7% of patients reported a persistent issue lasting longer than six weeks.

Considering there have been more than 264 million confirmed COVID-19 infections since the onset of the pandemic, the percentage of people on Earth impacted by long-term issues could be substantial — something Chandra has previously described as affecting "a whole generation of people."

"The number of (COVID) patients walking around with smell and taste loss is just going to grow," Chandra said. "The long term of this is, how do we rehabilitate it?" 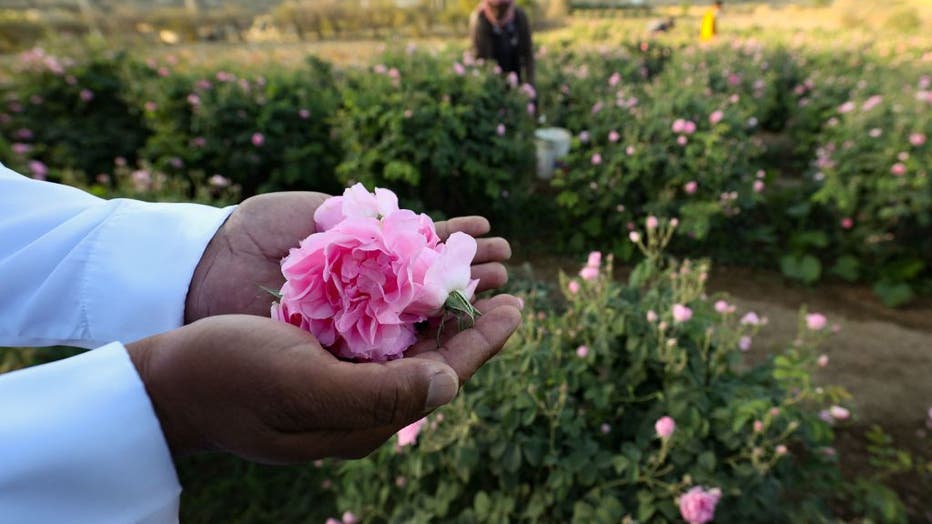 FILE - A person holds a rose in their hand in a file image taken in the western Saudi city of Taif, on April 11, 2021. (Photo by FAYEZ NURELDINE/AFP via Getty Images)

The findings were reported earlier this year in the International Forum of Allergy and Rhinology and involved patients between February and November 2020.

Dr. Nikita Chapurin, an otolaryngology resident and co-author of the study, previously noted "a certain amount of COVID-19 fatigue in medicine and society. But COVID is here to stay."

"About 200 million people have been affected by it, and even if only 10% have prolonged (smell and taste loss) recovery, that’s a significant number of patients with a reduced quality of life," Chapurin added.

It’s not yet fully understood why some COVID-19 patients don’t recover from smell and taste loss, which remains a focus of study for Chandra and Capurin.

That percentage "is still a lot of people, given the millions that have been afflicted with COVID-19," said Dr. Evan Reiter, medical director of the Smell and Taste Disorders Center at Virginia Commonwealth University and a co-investigator on the study.

How can a virus cause smell and taste loss?

Researchers believe one possibility is that people with upper respiratory infections often have congestion, drainage and other nasal symptoms that can block an odor’s ability to reach the smell nerve — which sits at the top of the nasal cavity, according to VUMC.

But the primary cause, particularly for those with extended or permanent smell loss, could be due to the virus prompting an inflammatory reaction inside the nose that can lead to a loss of the olfactory, or smell, neurons.

"In some cases, this is permanent, but in other cases, the neurons can regenerate. That’s likely what determines which patients recover," the medical center states online.

Omicron variant: What to know about the new COVID-19 strain

An advisory panel of the World Health Organization classified on Nov. 27, 2021, a worrying new COVID-19 variant first detected in South Africa as a highly transmissible virus of concern, naming it "Omicron" under its Greek letter system.

Possible predictors of loss of smell and taste with COVID-19

Chandra said that generally, a person’s sense of smell can diminish with age, and women usually have a more astute sense of smell compared to men. But COVID-19 related smell loss is "disproportionally represented by younger females."

"That’s a little paradoxical compared to who generally gets smell and taste disorders, broadly speaking," he said.

Researchers don’t know why this would be the case. Chandra said it could be because their smell was better to begin with so the loss of it is more apparent — or perhaps another reason.

He added that patients with a milder COVID-19 infection are also more likely to have smell and taste loss, "so the disease severity seems to correlate in the opposite direction with the incidence of smell loss." Previous research has shown similar findings.

The impact of losing taste and smell

Losing your ability to smell or taste things may seem like a mild inconvenience compared to other serious health consequences of COVID-19, but it’s also connected with parts of our brain associated with emotions and memory.

A survey of adults with COVID-19-related smell and taste issues, also conducted by Reiter’s team at Virginia Commonwealth University School of Medicine, found that 87% of respondents had "reduced enjoyment of food" and 43% reported being depressed.

Chandra said with other smell and taste disorders, such as those with chronic sinus infections, the loss is often more gradual.

"But when something goes out, like turning off a light switch, it’s remarkably distressing. And with smell and COVID, it kind of just goes away. It’s almost a complete and total loss," he explained.

Humans are constantly sampling their environments, such as the air we breathe and any dangerous signals — such as smoke — that we might detect. It also has emotional associations, such as walking into a grandmother’s house or the smell of coffee in the morning.

"It triggers all these downstream feelings in your brain," Chandra said. "So when that goes away, there’s this sense of being shut off that people describe."

How to boost chances of smell returning

Overall, those under 40 are more likely to recover these senses compared to older adults, the team at Virginia Commonwealth University found.

But to enhance one’s chances of recovering their sense of smell, researchers recommend what’s called olfactory training, which involves repeatedly smelling essential oils such as lemon, rose, cloves and eucalyptus for at least 20 seconds each twice a day.

This type of training should continue for at least three months — or longer if possible.

"Smell them one by one in order in the morning, and do the same thing in the evening, and every five days change the order," Chandra recommends. "It helps with odor discrimination and identification over time."

RELATED: 1 in 100 in Germany infected with COVID-19, health minister says