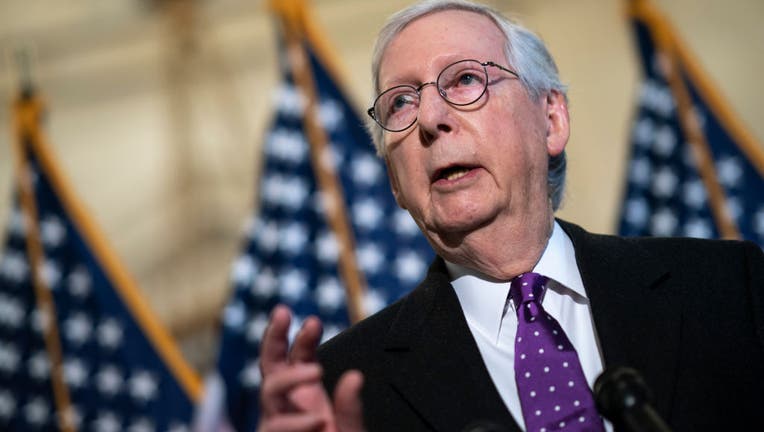 In a clip of the press conference from C-SPAN, McConnell explained "‘It was a violent insurrection with the purpose of trying to prevent the peaceful transfer of power after a legitimately certified election."

The RNC has come under fire for its perspective regarding Jan. 6, where supporters of former President Donald Trump stormed the U.S. Capitol as lawmakers were certifying President Joe Biden’s win. More than 700 people have been arrested and charged with federal crimes.

More than 70 defendants remain detained on riot charges. At least 183 defendants have pleaded guilty to riot-related charges as of Jan. 11. At least 78 of them have been sentenced, including 35 people who received jail or prison sentences or time already served.

Last week, the RNC censured two GOP lawmakers for participating on the committee investigating the violent Jan. 6 insurrection and assailed the panel for leading a "persecution of ordinary citizens engaged in legitimate political discourse."

President Joe Biden, on the anniversary of the January 6 Capitol Riot in Washington, D.C., spoke about the insurrection, noting it was the first time a president who just lost an election tried to prevent the peaceful transfer of power. Biden says the rioters were looking to subvert the constitution and "they failed."

GOP officials took a voice vote to approve censuring Reps. Liz Cheney of Wyoming and Adam Kinzinger of Illinois at the party’s winter meeting in Salt Lake City. The censure was approved a day after an RNC subcommittee watered down a resolution that had recommended expelling the pair from the party.

The censure accuses Cheney and Kinzinger of "participating in a Democrat-led persecution."

RNC Chair Ronna McDaniel denied that the "legitimate political discourse" wording in the censure was referring to the violent attack on the Capitol by supporters of then-President Donald Trump and said it had to do with other actions taken by the House committee investigating the Jan. 6, 2021, insurrection. But the resolution drew no such distinction.

RNC members take issue with what they see as the overly broad subpoenas, including one for Arizona GOP Chair Kelli Ward. Ward, an osteopathic doctor, sued to block the subpoena and argues that providing her phone records would compromise patients’ privacy.

Jacob Chansley, the so-called "QAnon Shaman" was sentenced to 41 months in prison for his role in the Jan. 6 riot at the U.S. Capitol.

As Republicans in Salt Lake City tied the party even more tightly to Trump, his former vice president, Mike Pence, rebuked him. Speaking to the conservative Federalist Society in Florida, Pence said Trump was "wrong" to suggest he could have overturned the election.

"I had no right to overturn the election," he said, also noting that Jan. 6 was "a dark day in the history of the United States Capitol."

Cheney, of Wyoming, and Kinzinger, of Illinois, are the only two Republicans on the House committee investigating the attack on the Capitol. Trump and other GOP members were incensed when Kinzinger and Cheney agreed to House Speaker Nancy Pelosi’s invitation to join the Democratic-led House committee, giving the Jan. 6 panel a veneer of bipartisan credibility.

The most consequential element of the censure is a call for the party to no longer support Cheney and Kinzinger as Republicans.

The censure — combined with support from RNC members from Wyoming — allows the party to invoke a rule to back candidates other than Cheney. It sets in motion a way for the party to support Cheney’s primary opponent, Harriet Hageman, who has been endorsed by Trump. Wyoming’s primary is in August.

Cheney spokesman Jeremy Adler said in a statement that the move subverted the will of Wyoming voters.

"Frank Eathorne and the Republican National Committee are trying to assert their will and take away the voice of the people of Wyoming before a single vote has even been cast," he said, referring to the Wyoming GOP chair who co-sponsored the resolution.

Kinzinger is not running for reelection.