The virus limits the diversity of new infection-fighting cells being produced and also destroys some of the long-lived memory cells that have learned how to fight off specific infections.

NETHERLANDS - Measles, one of the world’s most contagious diseases, keeps a hold of those who have contracted it long after the symptoms fade — two new studies found that the virus wipes away significant portions of the immune system’s “memory,” which is what causes children who have contracted the measles virus to remain especially vulnerable to other infections long after they kick the measles.

Measles was found to eliminate between 11 percent and 73 percent of children’s protective antibodies, which are the pieces that make up the body’s immune memory.

Other epidemiological studies have shown an association between measles and increased risk of additional illness or death for years following infection, but scientists couldn’t pinpoint the reasons why.

The new research found that measles infection can greatly diminish immune memory of prior illnesses, returning it to a state similar to that of a baby’s and leaving the body less equipped to handle fighting off new infections.

The findings come from two studies — the second of which builds on the first — which both focused on studying a population of unvaccinated children in an Orthodox Protestant community in the Netherlands.

Researchers recruited volunteers from three schools in the area and took blood samples from healthy, unvaccinated children aged four to 17.

After a measles outbreak occurred in 2013, researchers followed up with the 77 children from the original pool who had been infected with the measles virus during the outbreak to perform repeat sampling.

The first study, led by Velislava N. Petrova from the Department of Human Genetics at the Wellcome Sanger Institute, found that the measles virus targets two facets of the immune system’s defenses by limiting the diversity of new infection-fighting cells and also destroying some of the long-lived memory cells that have “learned” how to fight off specific infections.

The immune system is constantly churning out a diverse range of new cells, or naive cells, which possess different surface receptors.

As a collective, these naive cells have the ability to recognize almost any pathogen that could be attacking the body, but their diversity is key to being able to properly identify and stave off infection and illness. The more diverse of a range they come in, the more protected we are from illness.

Long-lived memory cells are another line of defense from the immune system, but they remain in circulation permanently, which helps the body quickly and easily identify and target any infections that the immune system has seen and combated before.

Petrova’s team found that the diversity of naive cells and the volume of memory cells was markedly lower in children who had contracted the measles virus than in those that had not.

The researchers referred to the destruction of memory cells as “immune amnesia,” and the implication of the immune system “forgetting” is that children who contract the measles may need to be revaccinated for previous diseases. 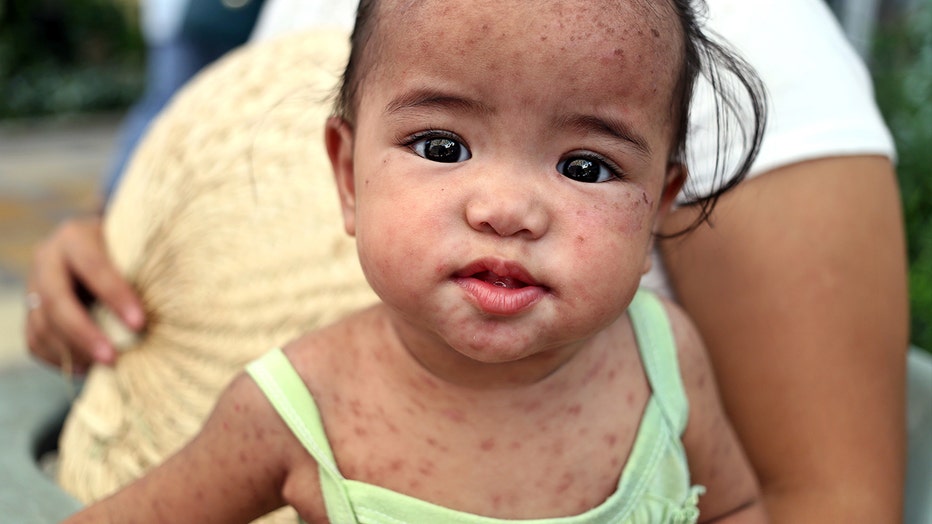 A Filipino child suffering from measles is treated in a hospital. (Alejandro Ernesto/picture alliance via Getty Images)

The second study, led by Michael J. Mina at the Harvard Medical School, analyzed the number of antibodies present in the children’s blood at about six weeks after their measles infection.

Antibodies are the blood proteins produced by immune cells in response to and counteracting a specific antigen — preexisting antibodies that offer protection from other pathogens were found to be depleted in children who had contracted measles by 11 percent to 73 percent.

“We’ve found really strong evidence that the measles virus is actually destroying the immune system,” said Professor Stephen Elledge, a geneticist at Harvard Medical School and co-author of the second paper, to The Guardian. “The threat measles poses to people is much greater than we previously imagined.”

The measles virus is one the of the world’s most contagious diseases and is caused by a virus in the paramyxovirus family. It is most commonly passed through direct contact and through the air, first infecting the respiratory tract and then spreading through the rest of the body.

Before we had a viable measles vaccine, which was first introduced in 1963, and then the addition of widespread vaccination efforts, major measles epidemics would occur about every two to three years, causing an estimated 2.6 million deaths each year.

WHO attributes the prevention of an estimated 21.1 million measles deaths between 2000-2017 to the widespread adoption of the measles vaccine, “making measles vaccine one of the best buys in public health.”

With a rise in anti-vaccination practices in recent years, progress toward the global eradication of measles has slowed, and the scientists behind the two recent studies warn that getting children the MMR (Measles, mumps, Rubella) vaccine is as important as ever.

The research also found that the MMR vaccine does not produce the same immune-suppressing effects as the virus itself, which means that those who get vaccinated get the benefit of lifelong immunity to measles without any of the damaging effects of contracting the virus naturally.