The viral video, which has garnered more than 8 million views, shows the Nevada mother in the passenger seat as her son films.

HENDERSON, Nev. - A woman was captured on video giving birth to her fourth child in the car on the way to the hospital while her husband drove and three children sat in the back seat.

Rudia Napier was on the way to Henderson Hospital on May 24 when her baby girl decided she couldn't wait, according to FOX 5 Vegas.

The four-and-a-half minute video, which was posted the next day and has garnered more than 8 million views, shows Rudia in the front passenger seat and her 10-year-old son filming from the back seat.

“I’ve done ALOT of 'things' in the front seat of my vehicles...But delivering a baby while driving AND with 3 crying kids in the back seat...Can I get a MVP or something,” father Michael Addison wrote in the post.

The video started as a pre-recorded message for their fourth child, according to the local station. It shows Michael Addison driving and sharing sweet messages for his newborn daughter on the way, while two of the kids are crying and a third records the video. 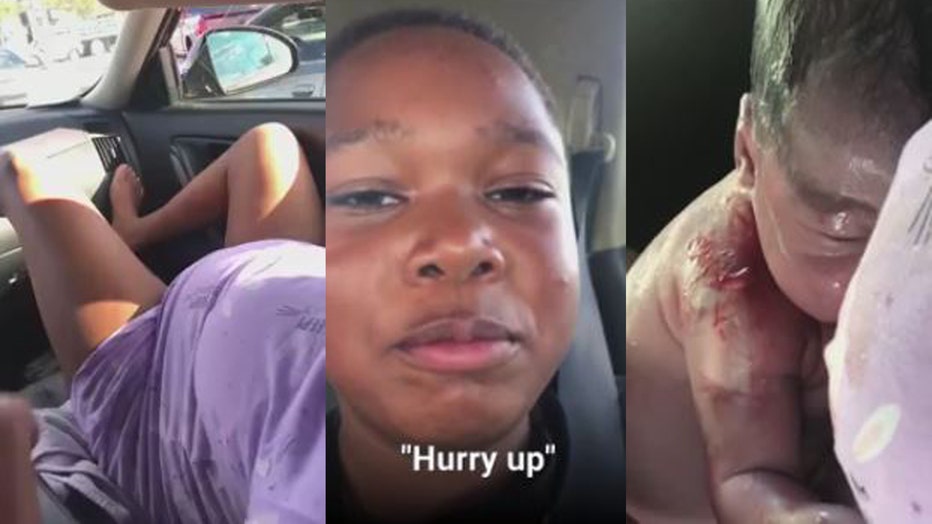 The now-viral video captured the moment a Nevada couple welcomed their fourth child into the world while driving to the hospital with their three other children in the back seat. (Photo credit: Michael Addison)

“We were driving for about one minute out of the five minute hospital commute before she started to go into labor,” Addison said.

Rudia can be heard yelling in labor pain, and soon enough, she's holding Jolee Lavergne Addison in her arms.

“Look at my baby! Look at our baby,” Rudia says in the video while her husband attempts to find the emergency room entrance to the hospital.

“You guys got a little sister! We got a baby. She's so pretty,” Rudia can be heard saying between tears in the emotional video.

Both mother and baby were admitted in good health to the hospital, according to FOX 5 Vegas.

“I've never been through anything like that in my life, and I've done some crazy stuff!” Rudia later told FOX 5, laughing.

Baby Jolee's original due date was June 9, according to her father.

After receiving so much attention about the arrival of their youngest daughter, the family started an online fundraiser to buy a larger vehicle for their entire family.