Mother of 15-year-old boy shot, killed in Kingsessing speaks out

A family is mourning the loss of a 15-year-old boy shot and killed in&nbsp;Kingsessing. Police say they have no reason to believe the teen or the kid he was with were the intended targets.

PHILADELPHIA - A Philadelphia family is mourning the loss of a 15-year-old boy shot and killed in Kingsessing. Police say they have no reason to believe the teen or the kid he was with were the intended targets.

Police say in 2021 juvenile victims of gun violence are up 200% over last year.

Nydisha Williams says her son would have likely been an engineer someday. He loved Bob Ross and Elon Musk and was looking forward to in-person learning at Freire High School.

"I’ve never understood why mothers who just lost their kid, I never understood how they can get on the news and talk about it. But my son deserves to be talked about," said Williams while sitting at home surrounded by family and holding a picture of her handsome 15-year-old son Antonio Walker, Jr.

"My strength is in his story," Williams added.

A story she expected to have a happy ending.

"He was an honor roll student, athlete, vegetarian," she said.

Her son was an all-around athlete but was at his best running track. His first year he was picked for the Penn Relays. 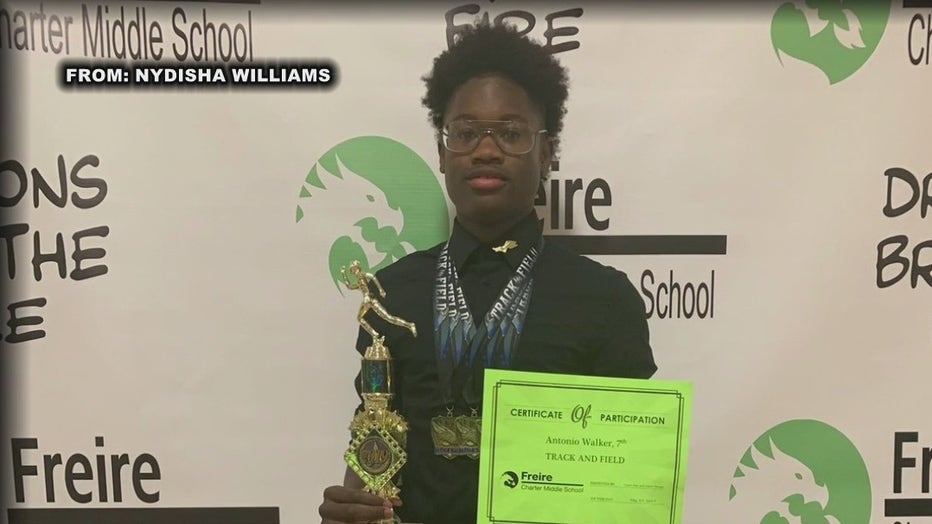 "My kid was different. He wasn’t in the streets," she said.

"He played basketball, he was with his cousin, they decided to visit an old neighborhood that the cousin resided in. They said they heard gunshots, they started running,  and apparently, my son was hit," she added.

She lost her son she says after doing everything she could to keep him safe.

"I fought to get us in a neighborhood and situation where this can’t happen to you. This can't happen to you. Even if I did let you go with your cousins you're not from around there," she said. Williams wants to see more murders solved.

"When you look at the news and you don’t see any crimes being solved, to me it rings a light bulb they didn’t catch them then they’re not going to catch me. But if oh they caught them they’ll catch me. You're going to think twice," she said.