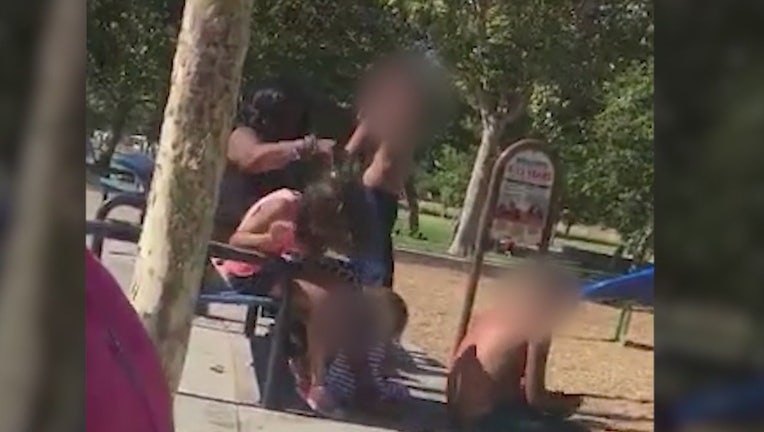 The video was taken at Tierra Bonita Park in Lancaster on Friday, and it allegedly shows daycare provider Yolanda Keith grabbing and smacking Ashley Holmes' 9-year-old daughter Mercedes, who is autistic, non-verbal, and has cerebral palsy.

“When I watched it I was more in shock,” Ashley Holmes said. “My daughter is just sitting there and she doesn’t fight back, doesn’t cry, so to me it’s like if she’s doing that in public how long has she been doing this? Has she been doing stuff to her in private?”

Holmes told FOX 11 the daycare provider, Yolanda Keith, is a woman she has worked with for the past several years.

“I got her through CCRC, the childcare resource center, through a referral,” she said. “I had interviewed her with their dad at the time and she seemed fine, she’s licensed, so that’s how we got everything with her.”

Keith operates her daycare business out of her home in Palmdale.

According to state records from the Department of Social Services, DSS has visited Keith’s home seven times since 2015. She has been cited nine times, including five class A citations, meaning an immediate health or safety issue.

Keith was last cited in March after DSS says a child suffered a burn on its arm after coming into contact with a heater in Keith’s bathroom after being left unattended for a long period of time.

There was no answer when FOX 11 knocked on Keith’s door on Monday, and a message to her via social media was not returned.

Holmes now plans to press charges against her.

“If it was me the parent, and I did that to her, she would be removed from my home just like that,” she said. “This is child abuse, at least assault if anything, if it’s not child abuse I know it’s assault.”

Holmes filed a police report with LASD’s Lancaster station, and they confirmed to FOX 11 they are investigating the case.

She also contacted DSS’s licensing department, in an effort to have Keith’s license revoked. She says DSS is taking the case seriously and has launched their own investigation.