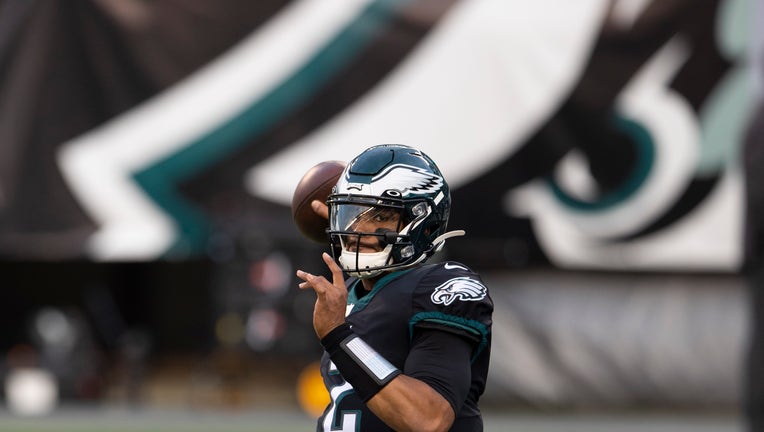 Jalen Hurts #2 of the Philadelphia Eagles warms up prior to the game against the New Orleans Saints at Lincoln Financial Field on December 13, 2020 in Philadelphia, Pennsylvania. (Photo by Mitchell Leff/Getty Images)

PHILADELPHIA - The NFL has finally released the league's first 17-game schedule for the 2021 season and the Philadelphia Eagles will be kicking off their season in Atlanta, Georgia.

The Eagles will be taking on the Atlanta Falcons on Sept. 12 at 1 p.m. on FOX 29, as part of FOX's NFL Doubleheader.

FOX's NFL Doubleheader culminates with a 4:25 p.m. match-up between NFC heavyweights as the Green Bay Packers head to New Orleans to take on the Saints. Also at 4:25, the Denver Broncos will try to help out the Eagles in their battle for the NFC East by knocking off the New York Giants in the Meadowlands.

The departures of Carson Wentz and former head coach Doug Pederson means the Eagles will be full of new faces for Week 1 and beyond. Second-year quarterback Jalen Hurts is expected to get the nod as the team's starting quarterback from new head coach and former Indianapolis Colts Offensive Coordinator Nick Sirianni.

We'll get our first look at the 2021 Eagles in their three preseason games on Aug. 12 vs. the Pittsburgh Steelers, Aug. 19 vs. the New England Patriots, and at MetLife Stadium against the New York Jets on a date that has yet to be determined.

Below is a quick look at the rest of the Eagles 2021 Schedule:

With the newly added 18th week in the regular season, the NFC and AFC Wild Card Playoffs will begin on Saturday, Jan. 15. Super Bowl LVI will be held at SoFi Stadium in Inglewood, California on Feb. 13.

With Sirianni and Hurts leading the charge, the Eagles hope to gain an instant impact from first-round draft choice and former Heisman Trophy winner DeVonta Smith. Philadelphia traded up two spots in the draft to No. 10 to select the University of Alabama wide receiver nicknamed "The Slim Reaper."

Carson Wentz will make his Indianapolis Colts debut at 1 p.m. against Russell Wilson and the Seahawks. Minnesota will visit Cincinnati in an interconference match-up and Detroit will host San Francisco.