The Philadelphia Eagles traded up two spots in the first round of the 2021 draft to select former Heisman Trophy winner and Alabama star wide receiver DeVonta Smith 10th overall.

PHILADELPHIA - Heisman Trophy winner DeVonta Smith became the sixth player from the Southeastern Conference, and third from Alabama, to be taken in the first 10 selections of the NFL draft.

Smith, the first receiver to win the Heisman since 1991, went No. 10 to the Philadelphia Eagles, who traded up to get quarterback Jalen Hurts' former college teammate.

The Birds selected Smith after trading the No. 12 overall pick and a third round pick to the Dallas Cowboys. 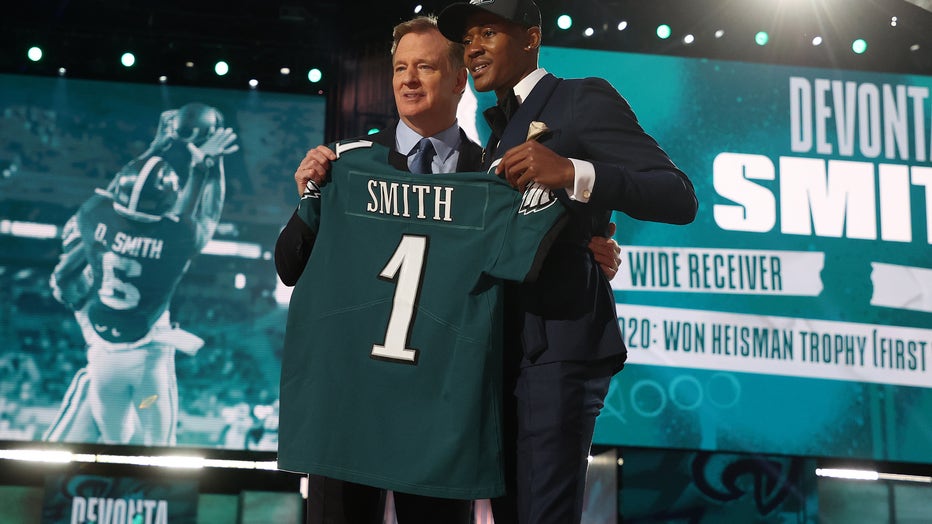 CLEVELAND, OHIO - APRIL 29: DeVonta Smith poses with NFL Commissioner Roger Goodell onstage after being selected 10th by the Philadelphia Eagles during round one of the 2021 NFL Draft at the Great Lakes Science Center on April 29, 2021 in Cleveland,

He was the second receiver on his team to be taken in the draft. Crimson Tide teammate Jaylen Waddle went No. 6 to the Miami Dolphins, after LSU's Ja'Marr Chase was selected by Cincinnati at five and Florida tight end Kyle Pitts went No. 4 to Atlanta.

The first two defensive players taken were from the SEC, too. South Carolina cornerback Jaycee Horn went No. 8 to Carolina and Alabama's Patrick Surtain went ninth to Denver.

The draft resumes Friday night with Rounds 2 and 3 at 7 p.m. ET. Day 3 shifts the final four rounds to daytime hours, beginning at noon ET on Saturday.

Eagles move back to 12th overall pick in draft, get future 1st round pick in trade with Miami