Lt. Sean Williamson, who spent 27 years working for the Philadelphia Fire Department, was laid to rest Monday after he was killed in a building collapse in Fairhill earlier in June.

PHILADELPHIA - A longtime Philadelphia firefighter killed in a building collapse in Fairhill earlier this month was laid to rest Monday.

A funeral mass for Lieutenant Sean Williamson, 51, was held at the Epiphany of Our Lord Church at 1121 Jackson Street in Philadelphia at 11 a.m.

Williamson was killed on the morning of June 18 when part of a building he was inspecting collapsed after a fire.

FOX 29's Dave Kinchen is in South Philadelphia where Lt. Sean Williamson will be laid to rest after being killed in a building collapse in Fairhill.

Authorities say the fire broke out at a commercial building on the 300 block of West Indiana Avenue around 2 a.m. In just 15 minutes, fire crews were able to get the fire under control, according to the Philadelphia Fire Department.

As the building was being inspected, a large portion of the building collapsed, causing multiple people to become trapped, including several firefighters and an inspector, per officials.

"I was walking in the house with the homeowner because I deal with the insurance company and, literally, as soon as I stepped in this mess, the building started collapsing," Emergency Services Representative Kareem Hampton said.

Fellow firefighters on scene stood on top of the collapsed building digging by hand and working quickly to save the trapped firefighters, but Williamson did not survive.

Eyewitnesses at the scene describe it as calm one moment and pure mayhem the next.

"The Fire Marshall had just walked in there. It happened so fast, it was like so sudden that literally two more seconds I could have been inside that building and I could have been the one trapped," Hampton recalled.

Williamson was a 27-year veteran of the department and he leaves behind his mother and son.

Philadelphia Mayor Jim Kenney called Williamson a hero for his decades of service protecting the residents of Philadelphia.

"For more than 27 years, he dedicated his life to serving and protecting the people of Philadelphia, and sacrificed his life protecting others," Kenney said. "... he exemplified heroism by doing what our first responders do every day; put on their uniform, leave their loved ones, and carry out their sworn duty to protect and serve the residents of this city." 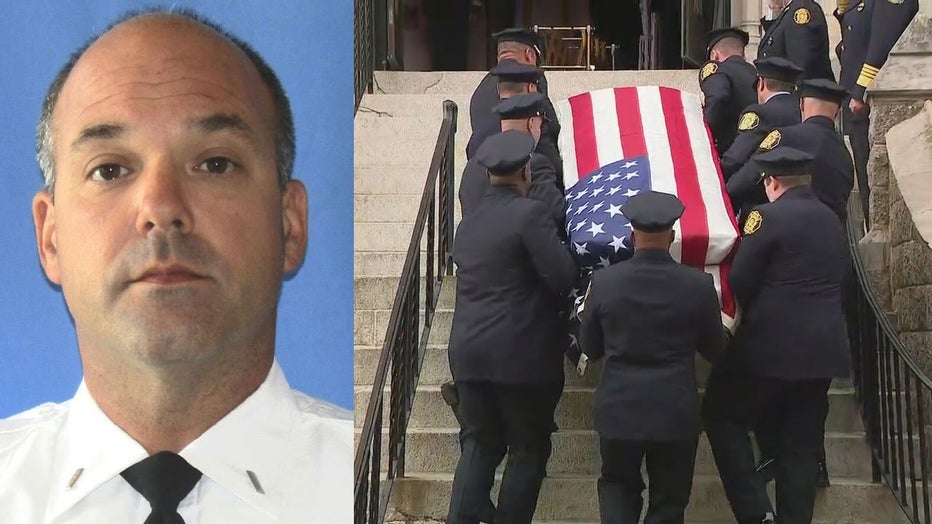