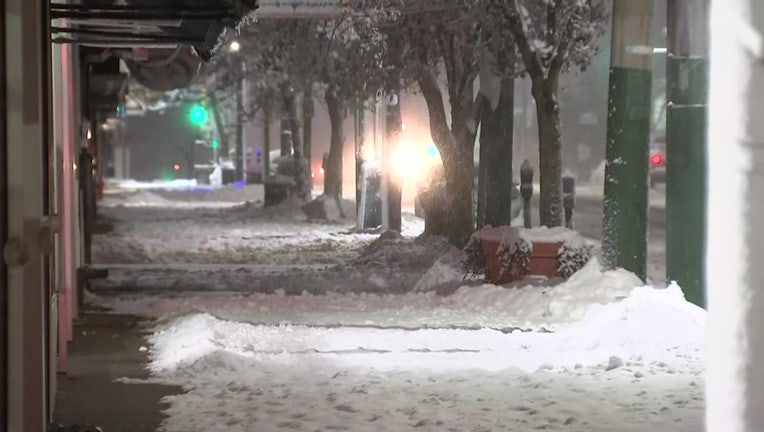 Snow in Philadelphia during the nor'easter of late January and early February 2021.

PHILADELPHIA - Philadelphia has lifted the snow emergency, officials announced Tuesday, after the nor’easter pulled away from the region.

The emergency declaration was initially issued in advance of the snowstorm.

The Philadelphia Streets Department continues to work to remove snow. All primary and secondary streets were deemed passable Tuesday afternoon. Crews were to continue their efforts across the city. Continued patience is asked of all people traveling through the city.

"This storm created several challenges including the combination of snow, sleet, and freezing rain. The freezing temperatures can make it challenging to plow streets," said Streets Commissioner Carlton Williams. "However, we will continue to chip away to make all residential streets passable. This does not mean roads will be completely clear of snow and ice but made passable for safe traveling."

Vehicles are allowed to park in snow emergency routes, now that the declaration has been lifted. Officials say if a person’s vehicle was relocated during the storm, call 215-686-SNOW to locate the vehicle. Officials urge people to not tie up 911 lines looking for a vehicle.

Sanitation and recycling collection will resume Wednesday, February 3, according to officials. For residents whose normal trash day is Wednesday, simply set the trash out on the curb in front of the residence. There will be no driveway collections, in order to prevent sanitation trucks from getting stuck in compacted snow in driveways.

There may be delays as trucks navigate streets. Patience is requested as crews work to collect the materials.

Anyone whose normal trash day is Monday or Tuesday must wait until Monday, February 8 or Tuesday, February 9 for their trash and recycling to be picked up.