Philadelphia reports more than 360 homicides so far this year

PHILADELPHIA - The gun violence continued on Monday as the number of homicides this year in the city grew to more than 360, making it the deadliest year since 2007 when 391 murders were reported.

Philadelphia police say a 29-year-old man and 48-year-old woman were found shot to death inside a home on North Lambert Street in West Oak Lane Monday night. So far, no arrests have been made but a weapon was recovered on the scene.

Earlier in the day, a 27-year-old was shot three times in the head on South Corlies Street in South Philadelphia. The man was taken to Penn Presbyterian Medical Center where he succumbed to his injuries.

Police say a 22-year-old man was shot multiple times on Fanshawe Street in Oxford Circle around 5 p.m. Monday. He was pronounced dead on the scene. A man in his 20s was shot in the head on Brill Street in the city's Crescentville neighborhood. He was taken to the hospital where he died. He has since been identified as Tashon Whitfield.

A short time later, around 6:45 p.m. officers responded to the 800 block of Brill Street for a report of a person with a gun. Responding officers found 17-year-old Lamont Brown suffering from a gunshot wound to the head. He was taken to the hospital but pronounced dead a short time later.

On Monday afternoon, 21-year-old Daejour Smith was shot nine times in the Lowe’s parking lot on Columbus Boulevard. He died at Thomas Jefferson University Hospital. The investigation is ongoing, but police say the shooting stemmed from an argument. 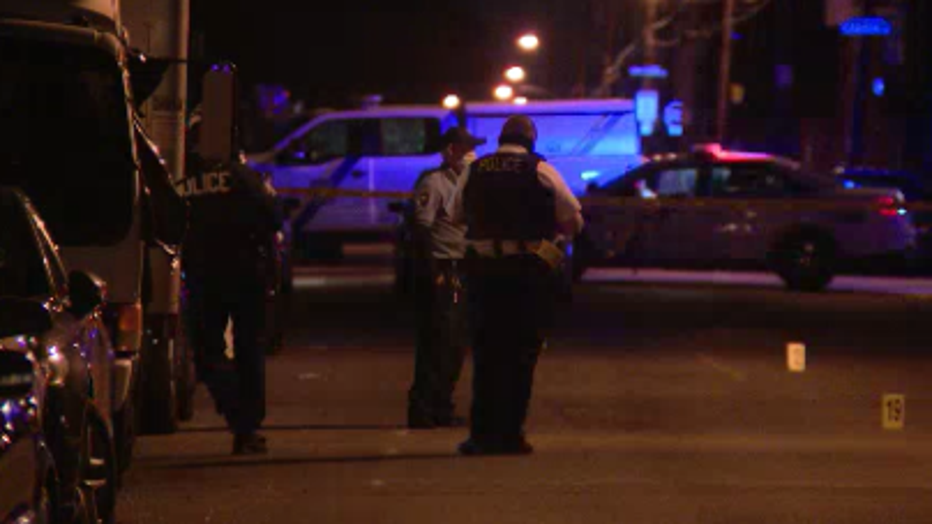 Police are investigating a shooting in Crescentville that left a man dead.

Early Tuesday morning, another shooting claimed the life of a 19-year-old man in Kingsessing.

Police say the victim was standing in the waiting area of a takeout restaurant when a gunman began firing through the open door, striking the victim multiple times in the chest.

Responding officers rushed the victim to the hospital where he later died. Police say the entire incident was captured on private surveillance cameras.

2020 is now the most violent year in the city since 2007 as the city recorded more than 360 homicides on Tuesday.

"Yesterday we experienced a Monday where six people were senselessly killed," Outlaw began. "As I have often said, every act of gun violence is absolutely tragic. However, it is especially shameful and sickening when the victims are among our most vulnerable."

"We are working very diligently and passionately toward the goal of a safer Philadelphia," Outlaw added.

She then went on to highlight reductions in homicides over the last 28 days in what she called "targeted areas" of the city.  Over the same 28 day period, Outlaw stated that homicides city-wide were down 10%. She says the numbers are a "short gain" but show that the department's efforts are working.

"Sadly these past few days have reminded us of a harsh reality - we are only one component of the criminal justice system. The notion that the police department alone can cure the pandemic of gun violence is not only erroneous, but it absolves other stakeholders of their duty to participate in the solutions to this public health crisis," Outlaw added.

To find resources for victims of violence in Philadelphia, click here.