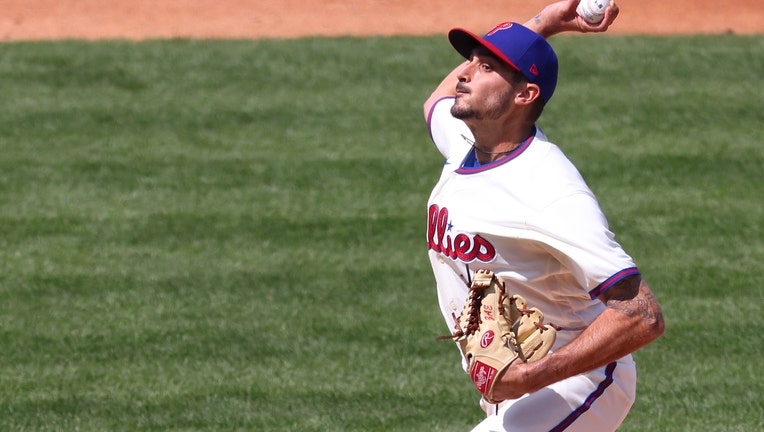 PHILADELPHIA, PA - APRIL 04: Zach Eflin #56 of the Philadelphia Phillies delivers a pitch against the Atlanta Braves during the fourth inning of a baseball game at Citizens Bank Park on April 4, 2021 in Philadelphia, Pennsylvania. The Phillies defeat

PHILADELPHIA - A whole lot of stellar pitching and just enough hitting gave the Philadelphia Phillies a good start on their quest to dethrone the three-time NL East champion Atlanta Braves.

Alec Bohm had a tiebreaking single in the eighth inning, Zach Eflin gave Philadelphia another strong start and the Phillies completed a three-game sweep of the Braves with a 2-1 win Sunday.

Philadelphia’s pitching staff was the story of the season-opening series as the starting trio of Aaron Nola, Zack Wheeler and Eflin surrendered only three runs, 11 hits and one walk while recording 24 strikeouts in 20 2/3 innings against NL MVP Freddie Freeman and an Atlanta lineup that led the majors in 2020 with 556 hits.

"We’re going to go through this in this game," Braves manager Brian Snitker said. "We’ll probably go through this in July or August. We faced some good pitching. But I’d rather face a team like us (as an opponent) early than late when we get our offense going and get some at-bats."

Eflin went seven strong innings, allowing only four hits and one walk while striking out eight. The lone mistake he made was hanging a curveball to Travis d’Arnaud, who pierced the winds blowing into Citizens Bank Park with a tying, solo homer in the seventh that ended Atlanta’s 19-inning scoring drought.

"We know that those guys can hit," Eflin said. "It’s a huge goal to go into a start and try to limit the amount of pitches they can hit. You stress weak contact against them. It’s great to pitch deep into the game for the first start, keep them off balance, get some double plays when I needed to and kept them guessing."

Philadelphia regained the lead in the eighth as Rhys Hoskins, Bryce Harper and Bohm hit consecutive singles off Chris Martin (0-1). Hoskins scored just ahead of the throw from center fielder Cristian Pache.

Hector Neris recorded his first save, dodging trouble caused by two-out walks to Freeman and Ozuna. D’Arnaud flied out to end it

"I think we proved to ourselves that any given night, we can go win a game and we have guys stepping up," Bohm said. "And we showed that our bullpen is for real with these guys shutting the door."

Atlanta starter Ian Anderson wiggled in and out of trouble early, striking out seven hitters while allowing four hits. Andrew Knapp homered in the second.

After playing in front of 8,500 people in the first two games of the homestand, the Phillies received permission from the City of Philadelphia to increase attendance on Sunday to almost 11,000 fans – roughly 25 percent of the attendance at Citizens Bank Park.

The club announced a crowd of 10,773 for Sunday’s finale with social distancing pods scattered around all levels of the ballpark.

The Commonwealth of Pennsylvania increased attendance limits at outdoor sports and concert venues to 50 percent on Sunday and 25 percent at indoor venues. The city of Philadelphia, however, has different regulations and has limited attendance to just 20 percent prior to Sunday.

Braves: Atlanta was scheduled to play at Washington in a three-game set beginning Monday. The Nationals had their first three games of the season called off because of a COVID-19 outbreak. Drew Smyly will make his first start for the Braves after coming over as a free agent from San Francisco. The Nationals have not announced their starting pitcher and were not fully cleared to have full squad workouts as of Sunday afternoon.