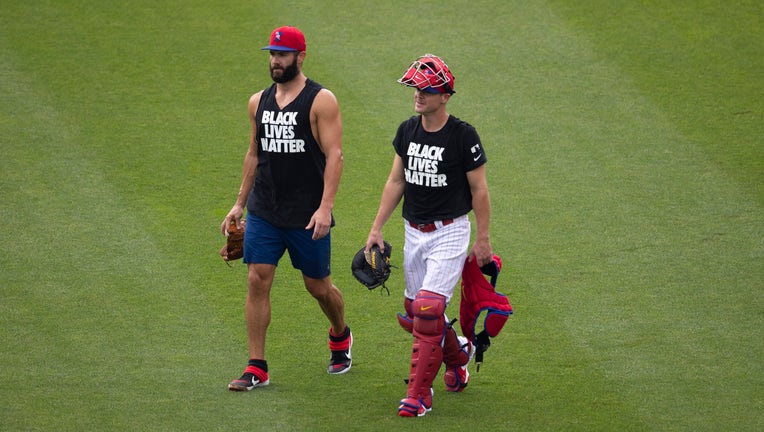 Jake Arrieta #49 and Andrew Knapp #15 of the Philadelphia Phillies walk to the dugout prior to the Opening Day game against the Miami Marlins at Citizens Bank Park on July 24, 2020 in Philadelphia, Pennsylvania. The 2020 season had been postponed sin

PHILADELPHIA - The Phillies showed their support for the Black Lives Matter movement during Opening Day at Citizen’s Bank Park on Friday night.

Phillies grounds crews spray painted “BLM” behind the mound in a display of unity. Players from the Phillies were seen wearing Black Lives Matter shirts during warm ups.

Every player, coach and personnel from the Phillies and Marlins held on to a black ribbon pregame. FOX 29's Kristen Rodgers reports no one kneeled during the national anthem.

In a joint demonstration of support for the Black Lives Matter movement, players, managers and coaches of the New York Yankees and Washington Nationals knelt in unison before the opening game of the 2020 baseball season, then stood for the national anthem Thursday night.