PHOENIX - An Arizona man who stormed the U.S. Capitol seven weeks ago while sporting face paint, no shirt and a furry hat with horns has asked to be released from jail as his lawyer disputed that his client was dangerous because he carried a spear into the riot.

Jacob Chansley, who twice quit eating while in jail until authorities gave him organic food, also is suffering from digestive tract difficulties due to the diet behind bars, said his attorney, Al Watkins, in a court filing Tuesday.

Watkins is trying to undo a mid-January decision by an Arizona judge who concluded Chansley was at risk of fleeing and obstructing justice and posed a danger to the community. The defense lawyer said Chansley, who is now jailed in Alexandria, Virginia, has no prior criminal history and didn’t act violently, enter offices in the Capitol building or steal classified materials during the Jan. 6 insurrection.

The U.S. Attorney’s Office for the District of Columbia, which is prosecuting Chansley, declined to comment on his request for release from jail. A judge in Washington has scheduled a March 5 hearing to consider Chansley’s request.

Chansley was among hundreds of pro-Trump supporters who charged past outnumbered police officers and stormed the Capitol as Congress was meeting to certify Joe Biden’s electoral win.

Authorities say Chansley was among the first people to force their way into the Capitol building, disobeyed orders by an officer to leave, refused the officer’s request to use Chansley’s bullhorn to tell rioters to leave the Senate chamber and wrote the note while in the Senate to Pence that said, "It’s only a matter of time, justice is coming." 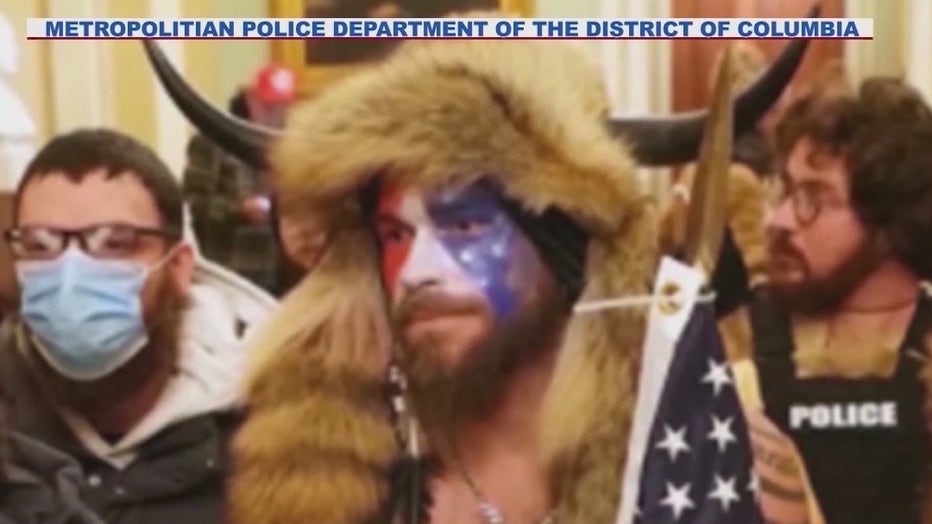 Chansley, who calls himself the "QAnon Shaman" and has long been a fixture at Trump rallies, unsuccessfully sought a pardon from Trump. He has since apologized for his actions during the insurrection and has soured on Trump, arguing he wouldn’t have gone to Washington if Trump had not called on him and other followers to go there.

He has pleaded not guilty to felony charges of civil disorder and obstructing an official proceeding, plus four other misdemeanor charges.

Prosecutors said the spear that sat atop a flagpole carried by Chansley into the Capitol was a dangerous weapon. Watkins has characterized the pointed tip as an ornament.

As for the note written to Pence, Watkins said Chansley didn’t intend to be threatening and was echoing some of the language used by Trump during his Jan. 6 speech that preceded the riot.

Although it’s unclear whether Chansley has been offered a COVID-19 vaccination while in jail, Watkins said in the release request that his client, as a practicing Shaman, cannot take a vaccine for the coronavirus. Watkins said his client had refused to take an anthrax vaccine when he served in the military.

FOX 10's Jennifer Martinez interviewed the mother of Jacob Chansley, otherwise known as Jake Angeli or 'QAnon Shaman' after he was arrested during a riot at the US Capitol on Jan. 6.

Watkins said the culpability of Chansley and others who didn’t act violently during the insurrection should be "appropriately contextualized with the unprecedented circumstances surrounding the former president’s inciting of tens of thousands of individuals to take the actions they took on January 6, 2021." Watkins argued others who were arrested have since been released from custody, including people accused of taking property from the Capitol and those associated with extremist groups.

He also pointed out that he has been unable to deal with a speeding ticket he was cited for in Oklahoma because he is in jail following the riots in the U.S. Capitol in January.

Continuing coverage of the Capitol riot: