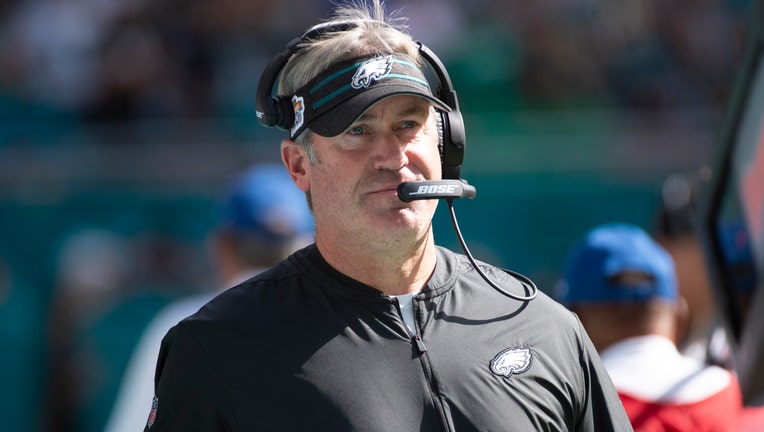 MIAMI GARDENS, FL - DECEMBER 01: Philadelphia?Eagles head coach Doug Pederson on the sidelines during the NFL game between the Philadelphia Eagles and the Miami Dolphins at the Hard Rock Stadium in Miami Gardens, Florida on December 1, 2019. (Photo b

PHILADELPHIA - Philadelphia Eagles Head Coach Doug Pederson is expected to return next season with a retooled coaching staff, according to a report from ESPN's Adam Schefter.

Pederson, whose play calling has come under scrutiny amid Philadelphia's disappointing 4-10-1 season, is reportedly set to meet with team owner Jeffery Lurie next week.

As part of a larger plan to retool the coaching staff around Pederson, a source told Schefter that the Eagles' will not bring back defensive coordinator Jim Schwartz, who is on an expiring contract. ESPN reports Schwartz will take the year off as he mulls retirement.

Pederson lead the Eagles to three straight playoff appearances; including the team's first Super Bowl win over the New England Patriots. He was hired in 2016 to replace Chip Kelly and has amassed a record of 32-21.

Philadelphia became the first NFC East team eliminated from postseason contention after a 37-17 loss to the Dallas Cowboys. The Eagles will wrap up their season on Sunday against Washington.