State Farm arena is nearly empty minutes before Game 3 between the Hawks and the Heat due to a report of a suspicious package on April 22, 2022. (FOX 5)

ATLANTA - Game three between the Atlanta Hawks and the Miami Heat was delayed for more than a half hour after authorities investigated a suspicious package near State Farm Arena.

The Hawks said a suspicious package was found outside Gate 2 of the Downtown Atlanta arena near the stairwell coming up from the MARTA station. 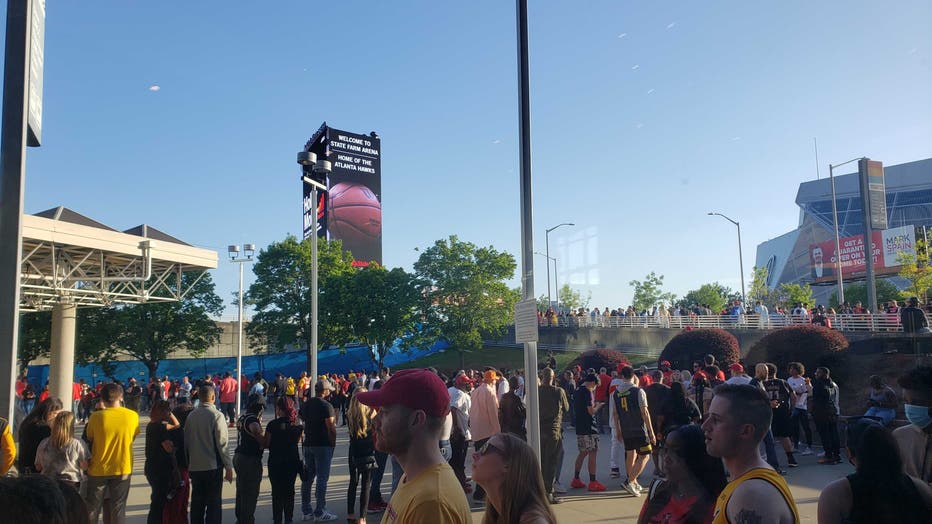 Fans wait outside State Farm Arena in Downtown Atlanta due to a report of a suspicious package that delayed Game 3 between the Hawks and the Heat on April 22, 2022. (Taylor Denman / FOX 5)

A statement released by the Hawks reads in part:

Out of an abundance of caution, Gates 1, 2 and 3 were temporarily closed by the Atlanta Police Department while the police department, K-9 units and Arena security worked to clear the area and investigate the contents of the package.

At the scheduled 7 p.m. tipoff, the arena was not even a quarter full.

The Hawks announced on their Twitter page the game would be delayed until 7:45 p.m.

Atlanta police and security were seen around the arena with K9s.

Police said as of 7:30 p.m., police said "the package is being removed and no threat was detected."

In a statement, the Hawks wrote:

"The contents of the package were not found to be explosive, and the package was removed safely by the Atlanta Bomb Squad."

The streets reopened shortly after that and so did all the arena.

This story is breaking. Check back for details. If you have additional information, pictures, or video email newstipsatlanta@fox.com.