NEWTOWN SQUARE, Pa. - There was a refreshing sound coming from homes along Ellis Avenue near West Chester Pike in Newtown Square Wednesday night.  Air conditioners are running again after crews got power back on this evening after Tuesday night's storm knocked it out.

Earlier in the day, it was a different story.  Crews spent the day removing tree limbs from power line and generators were running non-stop.  We drove around and saw street after street lined with downed trees and tarps on roofs. 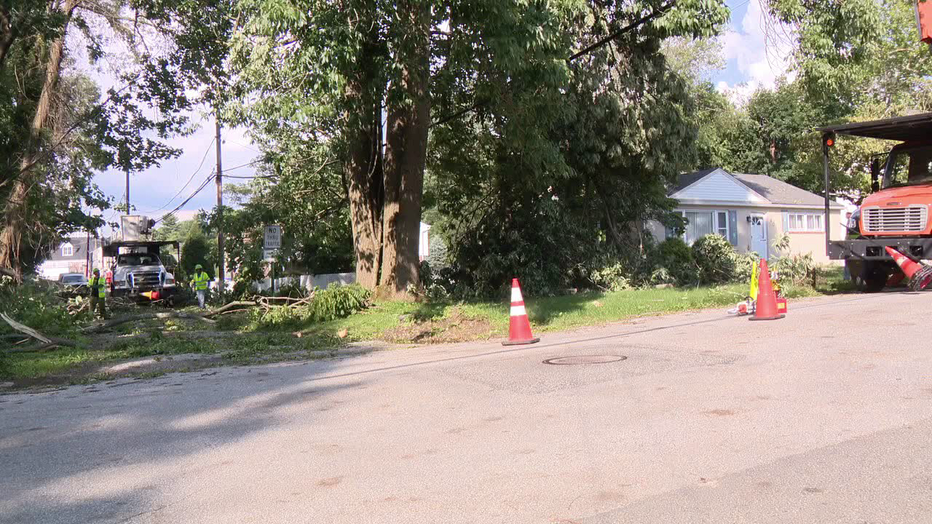 "I almost thought it was a tornado coming through here it was so bad," said Chris Lauber.  He still can't believe a gigantic tree uprooted across the street from his house.

"We felt the ground shake like it was an earthquake.  Then my wife said there's a tree down out front," he said. Thunder, lightning, heavy rain and strong winds wreaked havoc in his neighborhood.

"When the air conditioning went off last night we tried to keep the windows closed to keep all the cool air in but as the day goes on it just evaporates," he said.  I talked to him this evening. He was home alone with his pit bull Sadie.  His wife and son fled to the shore.

"She's panting a lot. We go sit in my car and put the air conditioner on listen to the radio," said Lauber.  Elsewhere in the neighborhood Mike Nicolaides, his wife Athena and daughter Antonia were doing fine when we checked in on them. They bought a generator although they hope they won't have to use it for long.

"We put it in last year and very glad we did," said Mike.  Neighbors still can't believe last night's storm did so much damage.

"I've never felt anything like it in my life," said Lauber.