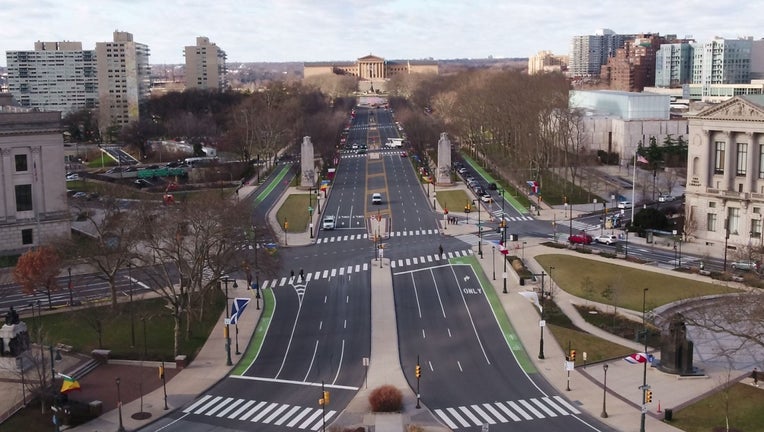 PHILADELPHIA - The City of Philadelphia has released the following list of road closures and parking restrictions for the 2020 Mummers Parade.

The parade, now in its 120th year, will be held on New Year's Day. It kicks off at City Hall and will move south to Washington Avenue via Broad Street.

More information about the parade route can be found at phila.gov/mummers.

Temporary "No Parking" signs will be posted starting Friday, Dec. 27. Parking restrictions will be in effect until the parades pass and streets are reopened, which varies by location. Vehicles in violation will be relocated, not impounded.

If your vehicle is relocated, please call your local PPD District Headquarters or 311. Do not call 911 for towed vehicles.

Parking is prohibited from 6 p.m. on Friday, Dec. 27 through 6 p.m. on Thursday, Jan. 2, on the east side of 15th Street from JFK Boulevard to South Penn Square.

Two east travel lanes on 15th Street closed from JFK Boulevard to South Penn Square from 7 a.m. Saturday, Dec. 28, through 7 a.m. Thursday, Jan. 2, for equipment load-in and staging. 15th Street may be closed completely for short intervals during this timeframe.

Parking is prohibited from 6 p.m. on Sunday, Dec. 29, through 6 p.m. Thursday, Jan. 2, on the west side of 15th Street from Arch Street to Ranstead Street. Street/sidewalk vendors will not be permitted to park in this area during this timeframe.

15th Street will be closed to southbound traffic at JFK Boulevard on Monday, Dec. 30, from 10 a.m. to 12 p.m. for equipment delivery and setup.

Parking is prohibited on the following streets from 4 a.m. Tuesday, Dec. 31, through 6 p.m. Wednesday, Jan. 1.

15th Street will be closed to vehicular traffic from JFK Boulevard to Market Street from 10 a.m. on Tuesday, Dec. 31, through 7 a.m. Thursday, Jan. 2.

The following streets will be closed to vehicular traffic beginning at 3 a.m. on Wednesday, Jan. 1, through the conclusion of the parade:

Broad Street will be closed to vehicular traffic from South Penn Square to Washington Avenue on Wednesday, Jan. 1 beginning at 7 a.m. through the conclusion of the parade.

Additional parking restrictions on Wednesday, Jan. 1 from 2 a.m. until 6 p.m. (both sides of the street unless noted):

Due to crowds and street closures, attendees are encouraged to use SEPTA's Broad Street and Market-Frankford lines. Bus detours, alerts and general information can be found on SEPTA’s website.

If you are coming into the city by car, a full listing of garages can be found on the PPA's website.

For additional information about the parade, see here.