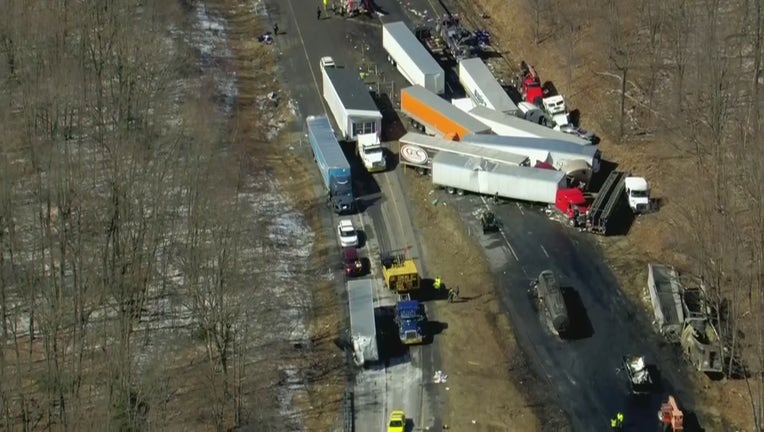 "There were 6 fatalities involved in this crash. Identities of the victims will be released once death notifications have been made to their families," state police in Frackville said.

Police also said the crash during "an active snow squall" Monday around 10:30 a.m. and involved 39 commercial vehicles and 41 passenger vehicles, for a total of 80, which is greater than earlier estimates of 40 to 60 vehicles.

Officials said the stretch of 1-81 opened at 12:30 a.m. Wednesday after crews finished clearing the crash site, state police tweeted. The southbound side had reopened hours after Monday's multivehicle wreck.

A state incident report noted 24 people were taken to four hospitals after the crash, which was captured in videos posted on social media that showed drivers and passengers lining the snowy road and jumping out of the way as the cascade of crashes unfolded.

In one video, an out of control tractor-trailer smashed into a large dump truck turning it nearly 180 degrees, another large truck caught fire and spewed black smoke into the air, and an SUV struck a passenger car sending it spinning narrowly past a person standing on the shoulder in snow and fog.

Some vehicles were mostly burned and others melted onto the highway, hampering efforts to clear the scene. Authorities also said they needed to go through each vehicle to make sure there were no human remains.