A Philadelphia police SWAT officer was treated and released at a local hospital after police say he was shot in his bulletproof vest in North Philadelphia while serving a warrant.

PHILADELPHIA - A Philadelphia police SWAT officer was treated and released at a local hospital after police say he was shot in his bulletproof vest in North Philadelphia while serving a warrant.

The incident occurred Friday afternoon on the 100 block of West Lehigh Avenue.

Police tell FOX 29 the officer was serving a drug warrant inside a three-story building. As the SWAT team was approaching the third floor unit they say a suspect fired at least two shots through the wall.

The lead SWAT officer was struck once in the chest, and the round struck his bulletproof vest. 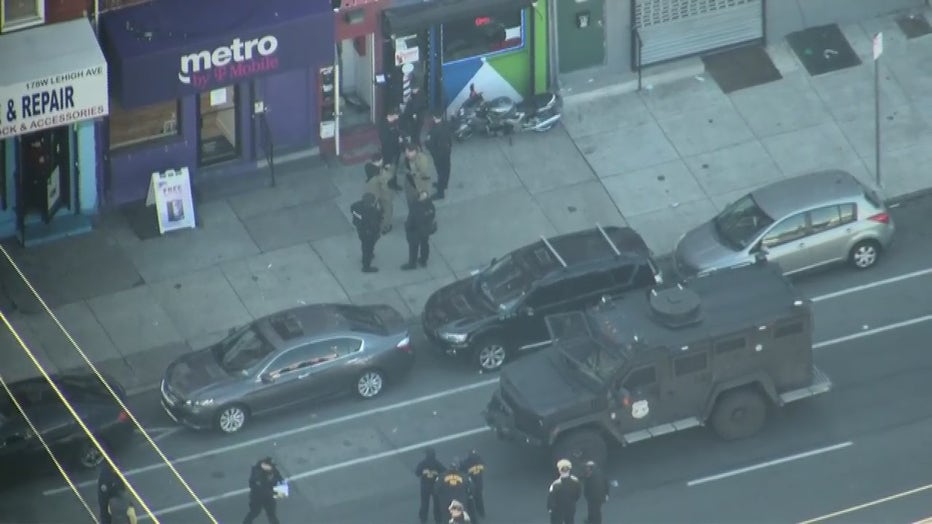 Police say the SWAT team was serving a warrant when one of the officers was struck in the chest by gunfire.

Police Commissioner Danielle Outlaw says the suspect fled out the third floor window and onto the second floor roof while still armed.

The suspect encountered officers that were in the back of the building, and one of the officers fired at the suspect, but he was not stuck.

Officers were able to arrest the suspect on the second floor of the building.

Outlaw says the suspect was someone police were looking for and had an active arrest warrant for narcotics distribution.

The property was held for a search warrant, and Outlaw says hazmat crews are responding as the property was suspected to have been used to make narcotics.

The officer has since been discharged from the hospital and a gun was recovered from the scene.

"We are grateful that our brave SWAT officer will survive today’s attempted murder of his life," Fraternal Order of Police President John McNesby said in a statement. "Our officers and many residents in our city are under siege by violent offenders who care less about accountability."