A football player for Camden High School was recognized Thursday after he comforted a little girl during a playoff at Pleasantville High. FOX 29's Bruce Gordon reports.

PLEASANTVILLE, N.J. - A football player for Camden High School was recognized after he sheltered and comforted a young girl he had never met when the bullets started flying during a  playoff game last month in Pleasantville, New Jersey.

"For every young person doing something wrong out there, there are ten people like this doing the right thing," Camden County Sheriff Gilbert Wilson said. 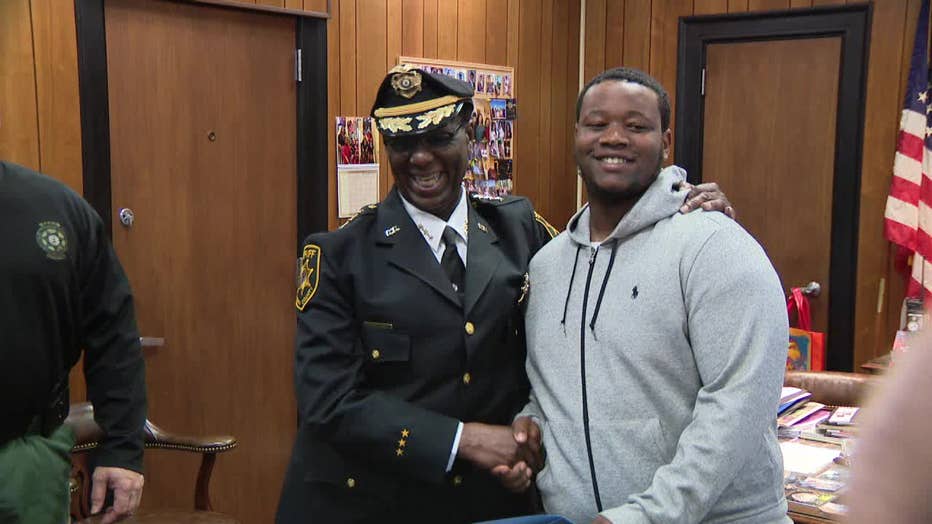 Smith, Camden High School's starting center, was on the field when gunfire rang out during the Panthers' playoff game at Pleasantville High. The shooting claimed the life of 10-year-old Micah Tennant.

In the chaos that ensued, Smith found a little girl alone and crying.

"I told her to get underneath the bleachers. Everything's going to be okay.  I just made sure I was there for her," Smith explained." "We laid on the ground. I still heard her crying. I inched closer to her and I just told her if you need me, grab my hand. I'm here for you.'"

Days later, Smith and his teammates resumed the game and completed their victory at Lincoln Financial Field.

By then, he had learned the little girl he had sheltered and comforted was the little sister of a Camden high teammate, who himself had once been injured in a shooting.

Those connected to the game say the aftermath of the tragic shooting drew both teams closer to each other and the players closer to their towns.

Smith never sought the limelight but the little girl told her father what happened and he spoke to Smith's coach.