Governor Phil Murphy joined Good Day Philadelphia to talk about the latest rising cases in the state and how they hope to have most adults vaccinated by the end of May and have children return to school in the fall.

TRENTON - Despite an increase in coronavirus cases and hospitalizations in New Jersey over the last several weeks, Gov. Phil Murphy believes the light at the end of the tunnel is getting larger.

In an interview with Good Day Philadelphia, Murphy acknowledged the state's current rate of transmission, which now sits above 1, and said he said his administration "expected" the uptick.

He attributed the rise in infections and hospitalizations to a number of things, including COVID-19 variants, population density, and the fluctuating spring weather. New Jersey on Tuesday reported over 4,300 new positive infections and 61 virus-attributed deaths.

"We're going to get through this, but we need to be vigilant and stay the course for a while longer," Murphy said.

Still, New Jersey on Friday will further ease more of its capacity restrictions with outdoor events jumping from 50 people to 200 attendees. Likewise, on Friday, indoor catered events can welcome up to 35 percent capacity or 150 people.

"We have increased limits on outdoor gatherings, on big venue gatherings, because we have confidence that you're safe in those settings," Murphy said. "It's in the smaller confines that we have to be careful."

Murphy attributed his hope for the future to the state's increased vaccine rollout, which has swelled to more than 4M partially vaccinated residents as of Tuesday afternoon. The governor said he hopes to have 70% of the state's adult population vaccinated by the end of May. 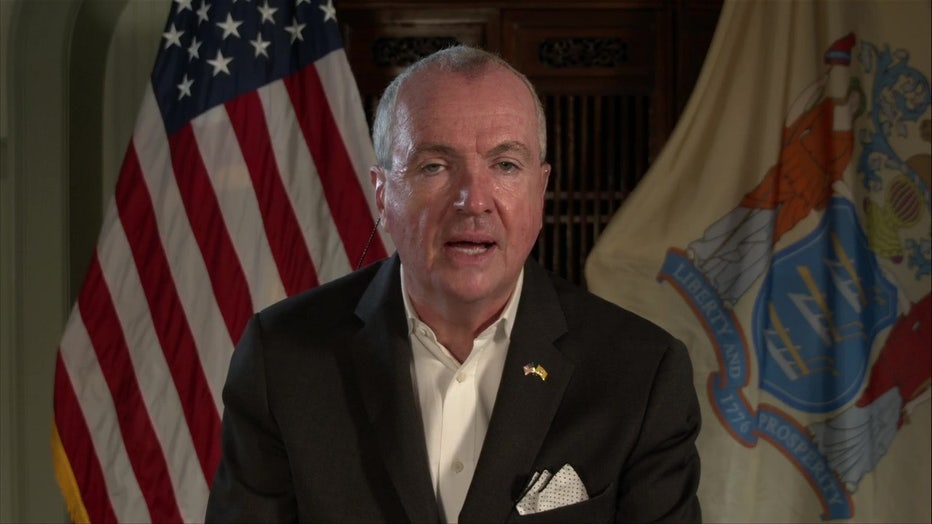 Gov. Phil Murphy hopes to have 70% of New Jersey vaccinated by the end of May.

New Jersey has long used Memorial Day as a benchmark for an "explosion" of vaccines. On Monday, all residents 55 and older, including Murphy and his wife Tammy, can seek out a vaccine appointment when eligibility expands. Murphy clarified that people who become vaccine eligible will be able to get an appointment and not be put on a waiting list.

"I think the light is real," Murphy said. "I've said this all along, we get to Memorial Day assuming the vaccine rollout continues as it's been going and we get more supply from the Feds - and that is beginning to happen - and folks continue to do the right thing, I think in a couple of months from now we're in a dramatically different place."