The restraining order hearing is expected to resume three more times in August.

LOS ANGELES - A Superior Court hearing took place Friday in downtown Los Angeles in connection to the sexual assault allegations against Trevor Bauer. While Bauer himself was present in court, the accuser will have to wait until early next month for a judge to decide whether to extend a restraining order against the Los Angeles Dodgers pitcher.

The judge granted a delay in Friday's scheduled hearing. The hearing is scheduled to resume on August 2, 3 and 19.

Bauer is in the center of two separate sexual investigations being conducted by Major League Baseball and the Pasadena Police Department. 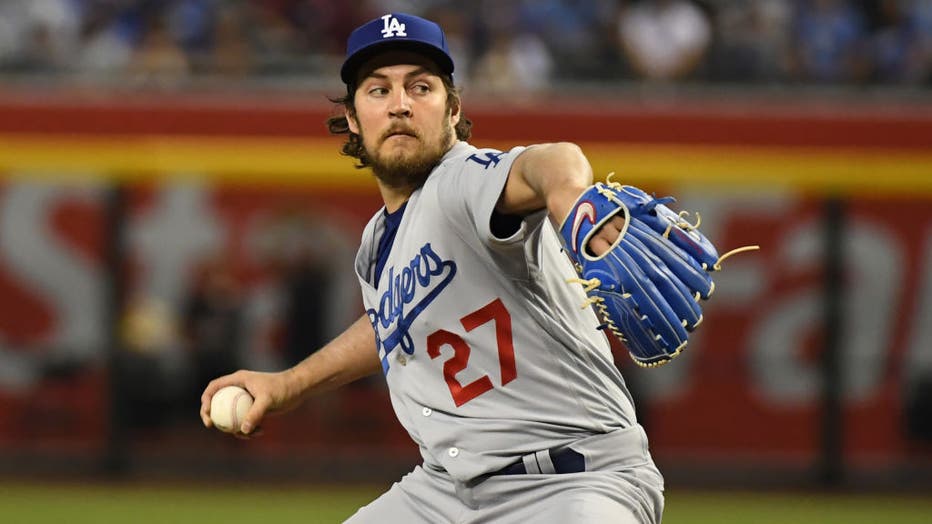 PHOENIX, ARIZONA - JUNE 18: Trevor Bauer #27 of the Los Angeles Dodgers delivers a pitch against the Arizona Diamondbacks at Chase Field on June 18, 2021 in Phoenix, Arizona. (Photo by Norm Hall/Getty Images)

FOX 11’s Mario Ramirez confirmed that Bauer did appear at the hearing. The pitcher was seen in a purple suit with his parents by his side and they were escorted by LA County sheriff’s deputies.

Late last month, a Southern California woman claimed the pitcher "got physical with her," without her consent and was granted a temporary domestic violence restraining order.

After the allegations surfaced, Bauer was scheduled to start in July 4 game against the Washington Nationals. However, he was placed on a seven-day paid administrative leave by MLB. Bauer has not taken the mound since June 28 and his leave has been extended through July 27.

In court documents obtained by FOX 11, the San Diego woman claims that some of the injuries she suffered from their sexual encounters left her crying and shaking. She also accuses the pitcher of choking her to the point of losing consciousness during their two sexual encounters at his Pasadena home in April and May.

In addition, court documents reveal that the accuser took herself to the emergency room and her legal team provided images of her with two black eyes and a laceration to her lip.

FOX 11 has opted not to name the accuser at this time or show photos from the documents, in accordance with policy to not identify potential victims of sexual assault.

Bauer’s attorney denies the woman’s claims and said the activity was consensual. His attorneys provided copies of text messages and Instagram direct messages leading up to the encounters that suggest the accuser requested the rough behavior.

While Bauer technically remains with the Dodgers, the organization has slowly distanced itself from the powerhouse pitcher. Bauer’s bobblehead night scheduled for Aug. 19 was canceled and the franchise pulled all of his merchandise from the team store.

Many of Bauer’s teammates unfollowed him on social media including Mookie Betts, Justin Turner, Kenley Jansen, and Albert Pujols.

It is unclear if Bauer will appear but his accuser is expected to show up.

No arrests have been made and no charges have been filed in the investigations.