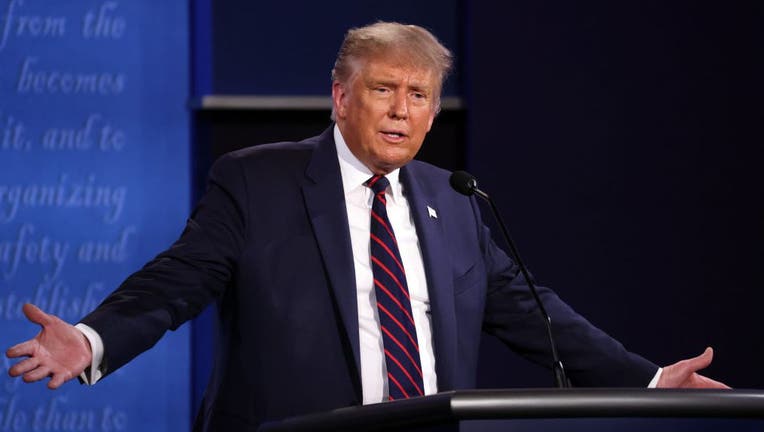 U.S. President Donald Trump participates in the first presidential debate against Democratic presidential nominee Joe Biden at the Health Education Campus of Case Western Reserve University on September 29, 2020 in Cleveland, Ohio. This is the first

PHILADELPHIA - President Donald Trump’s campaign is threatening to sue to gain access for its campaign officials to observe activity inside of newly opened satellite election offices in Philadelphia.

Residents can use those offices to register to vote, apply for mail-in ballots and fill them out.

A letter sent late Tuesday night by a lawyer for the Trump campaign insisted that the campaign has a legal right to observe the voting process.

It vowed to sue by 5 p.m. Wednesday if the matter isn't resolved. Election lawyers say there is no right in Pennsylvania law, even for a certified poll watcher, to observe inside an election office.

During the first presidential debate Tuesday night, President Donald Trump mentioned Philadelphia and satellite voting centers after his tweets earlier in the day claimed that poll watchers were not allowed in.

"As you know today there was a big problem. In Philadelphia, they went in to watch. They're called poll watchers. It’s a very safe, very nice thing. They were thrown out. They aren't allowed to watch. You know why? Cause bad things happen in Philadelphia," Trump said.

Election officials have disputed that claim, and election lawyers note Trump campaign's watchers had no legal right under state law to observe citizens filling out mail ballots at the satellite voting centers.

Philadelphia commissioners voted to open satellite election offices throughout the city, creating easier avenues to vote. So far the city has seven satellite offices with plans to add 10 more in the near future.