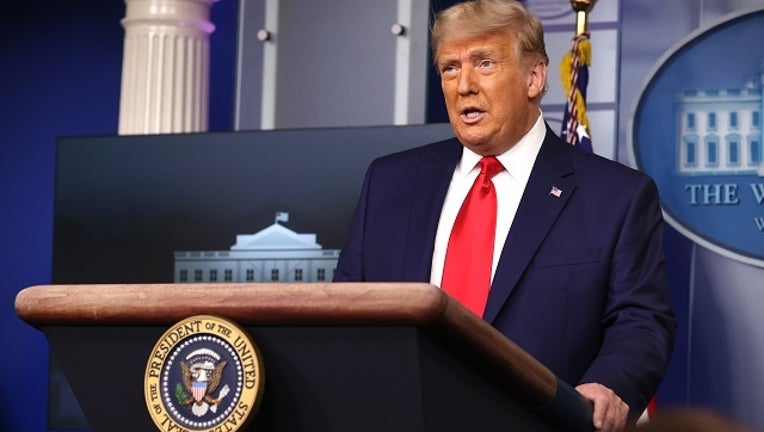 WASHINGTON - President Donald Trump on Wednesday baselessly claimed anew that he had won the election and uttered repeated falsehoods as he called into an event held by Pennsylvania Republicans to investigate unproven allegations of voter fraud.

“This was an election that we won easily. We won it by a lot,” Trump declared to the group gathered at a hotel in Gettysburg. Trump, in fact, lost to President-elect Joe Biden by about 80,000 votes in the state, and Pennsylvania certified Biden as the winner on Tuesday.

The Pennsylvania event was the latest attempt by Trump and his lawyer Rudy Giuliani, a former New York City mayor, to try to cast doubt on the results of the democratic election, even as the formal transition process has begun and a growing number of Republicans are recognizing Biden as president-elect. Similar events have been scheduled in Arizona and Michigan.

State election officials across the county and international observers have said there is no evidence of widespread voter fraud, and Trump’s legal team has lost repeatedly in court, in addition to making numerous elementary errors.

Wednesday’s event, hastily organized by Republican state lawmakers, including Pennsylvania state Sen. Doug Mastriano, an outspoken Trump supporter, came with trappings of an official hearing — flags, a gavel, and unsworn “witnesses” who “testified” in person and by phone.

Among them was a special guest — the president — who at one point had been expected to attend in person, but did not after another member of his legal team announced that he had tested positive for the coronavirus Wednesday morning.

Trump spoke for about 11 minutes via a phone held up to a microphone by his lawyer Jenna Ellis and insisted again that the election had been “rigged” for Biden.

“This election has to be turned around,” he stated.

It was yet another stunning declaration from an American president advocating overturning a democratic election and the voters’ will because he wants to stay in power.

The hotel where the Senate Majority Policy Committee met is about a mile from the scene of Pickett’s Charge, where Union troops repelled a desperate Confederate attack in July 1863. It helped turn the tide of the American Civil War against the slave-owning South.

The Trump campaign on Wednesday asked the U.S. 3rd Circuit Court of Appeals for the chance for Giuliani to give oral arguments in its appeal over the vote count in Pennsylvania. The court has not yet said if it will hear arguments.

What happens at the Electoral College meeting?

Michigan's State Board of Canvassers votes to certify election