College basketball fans flocked to New Orleans this week for the NCAA Men's Basketball Final Four. FOX 29's Tom Sredenschek caught up with some Villanova fans who made the trip down to the Big Easy to cheer on the Wildcats.

NEW ORLEANS - Bill Self was wading through old video of Villanova this week, trying to scout a specific action that the Wildcats use on the offensive end of the floor, when the Hall of Fame Kansas coach did something he's avoided the past four years.

Self watched film of the 2018 Final Four.

The one where the Wildcats embarrassed Kansas on their march toward a third national championship.

"I didn't really watch it to try to, you know, have memories," Self said with a grim smile Friday. "I say I watched it — I got through about 12 minutes of it. After that it was very obvious I wasn't going to enjoy it. There are other tapes to watch."

Plenty involving the Jayhawks and Wildcats.

The college basketball powers have become regular NCAA Tournament dates over the years, and their latest their high-stakes showdown comes Saturday night, when they square off again in the national semifinals at the Superdome.

It will be the fourth time since Self and Villanova counterpart Jay Wright took over in the early 2000s that they've matched wits in the Sweet 16 or beyond, and each time, the winner has gone on to claim the national championship.

That includes Self's lone national championship in 2008, the first for Wright in 2016, and that memorable 2018 matchup in San Antonio that folks in Kansas have tried to forget — and that fans in Philadelphia continue to cherish. 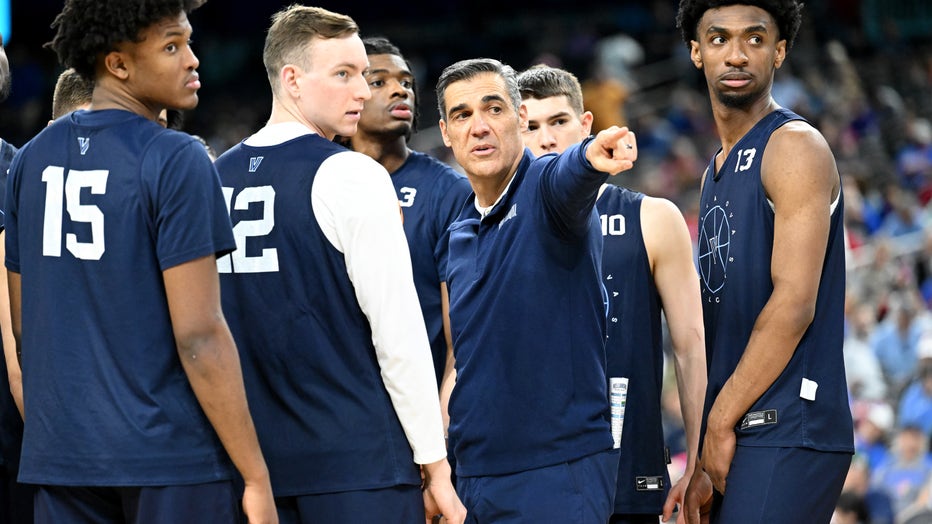 NEW ORLEANS, LOUISIANA - APRIL 01: Head coach Jay Wright of the Villanova Wildcats points as he talks with Jordan Longino #15, Kevin Voigt #12, Brandon Slater #3, Angelo Brizzi #10 and Trey Patterson #13 during a practice session ahead of the 2022 NC

"It was just one of those games," recalled Wright, whose team roared to a 22-4 lead, dropped an astounding 18 3-pointers and was never challenged after about 5 minutes. "We've been on the other side of that. I remember looking down at Bill and thinking, ‘I’ve been there before.' It just so happened it was a Final Four game."

Self and Wright are quick to say what happened in the Alamodome has no bearing on what will take place in the Superdome, where the winner will face Duke or North Carolina for the title. But the programs are the same, and so are some of the players, thanks to medical and COVID-19 waivers that have produced two of the oldest teams in Final Four history.

In fact, two-time Big East player of the year Collin Gillespie is still running the show for the Wildcats four years later, and Kansas big man Mitch Lightfoot is still giving the Jayhawks energy and attitude off the bench.

"Its fate, almost. Like it's written," Lightfoot said. "We played them in the Four and lost to them in 2018, so it's only fair to go out there and give them our best shot, and we're going to get their best shot. It's going to be a great game."

Villanova will square off against Kansas in its Final Four matchup this weekend. Locals are excited to cheer the Wildcats on their quest to another National Championship, while authorities are remaining diligent to make sure celebrations remain safe.

Kansas has been perhaps the most dominant team in the tournament, rolling into the Big Easy as the lone No. 1 seed still standing, while the Wildcats have become a feel-good story after losing star guard Justin Moore to an injury.

Yet both have flown under the radar. And they're content to let the epic Duke-Carolina showdown — their 258th meeting but first in the NCAA Tournament, and the last for retiring Blue Devils coach Mike Krzyzewski — absorb the harsh spotlight that comes with playing on college basketball's biggest stage.

"It's perfect. We don't need anybody to talk us up," Jayhawks guard Christian Braun said. "We know who we are. We're Kansas. We're the only No. 1 seed and that's for a reason."

Villanova and Kansas will welcome fans back to the Final Four as the first onto the floor first Saturday night. Only about 8,000 were allowed in the stands of Lucas Oil Stadium last year, when the tournament was played entirely inside a COVID-19 bubble in Indianapolis. But a sellout crowd of more than 70,000 is expected at the Superdome, and thousands more are expected in the nearby French Quarter as four of college basketball's premier programs face off.

Moore, the Wildcats' second-leading scorer, had surgery this week after tearing his Achilles tendon in the final minute of their regional final with over Houston last Saturday. Now, one of their captains is left to cheer from the bench.

"It means everything to us to have him around," Villanova guard Eric Dixon said. "We miss having him on the court, but it's bigger than him as a basketball player. That's our friend, our brother. So it's good to have him around."

The hottest player in the tournament just might be Kansas guard Remy Martin, who transferred from Arizona State for his final season but struggled through injuries and a crisis of confidence. He continues to come off the bench, even though he's averaging nearly 17 points in the tournament, giving the Jayhawks a big scoring punch.

Martin could find himself going toe-to-toe with Caleb Daniels, who spent two seasons at Tulane before entering the transfer portal and ending up at Villanova. Daniels is averaging 11 points through four tournament games.

One thing Villanova does better than anybody — and more often — is post up its guards. Moore might have been the best at it, but Gillespie does it well, too. It's a part of Wright's offense that originated about a decade ago with Ryan Arcidiacono but has been passed down through Josh Hart and Jalen Brunson to the current group.

AGE IS JUST A NUMBER

Kansas guard Jalen Coleman-Lands will be playing in his 170th game Saturday night, third-most in Division I history, and Lightfoot is just four behind. Gillespie will be playing his 156th and Villanova teammate Jermaine Samuels his 152nd. All have taken advantage of medical or COVID-19 waivers — or both — to extend their eligibility, producing what might be the oldest, most experienced national semifinal game in history.

"Experience goes a long way," said All-American guard Ochai Agbaji, who has played a mere 120 games for Kansas. "I think we're all battle-tested. We pride ourselves on that. We have a lot of confidence no matter the circumstances."