PHILADELPHIA - Following a morning of heavy snow and freezing rain, conditions calmed down Thursday afternoon. The winter storm that has already brought 10 inches of snow to parts of the region will continue with a light wintry mix overnight and into Friday.

The additional snow accumulations will move from the southwest between 2 a.m. and 7 a.m. Friday.

The National Weather Service retooled their Winter Storm Warning on Thursday afternoon by centralizing its scope to areas of southeastern Pennsylvania and abutting parts of New Jersey and Delaware until Friday morning.

Most parts of the Delaware Valley have experienced winter weather since early Thursday morning. The mix of snow and ice has created slick roads and otherwise treacherous travel on untreated surfaces. As the storm forges ahead with more sleet, conditions could become doubly hazardous.

HOW MUCH SNOW WILL WE GET?

According to the FOX 29 Weather Authority, most of southeastern Pennsylvania can expect upwards of 6 inches of snow. Bordering parts of New Jersey and Delaware could also see half a foot of powder.

Areas north and west of Philadelphia and into New Jersey could see particularly high snowfall totals approaching 10 inches. A band of heavy snow lingered over this part of the region for most of Thursday morning resulting in uniquely high accumulations. 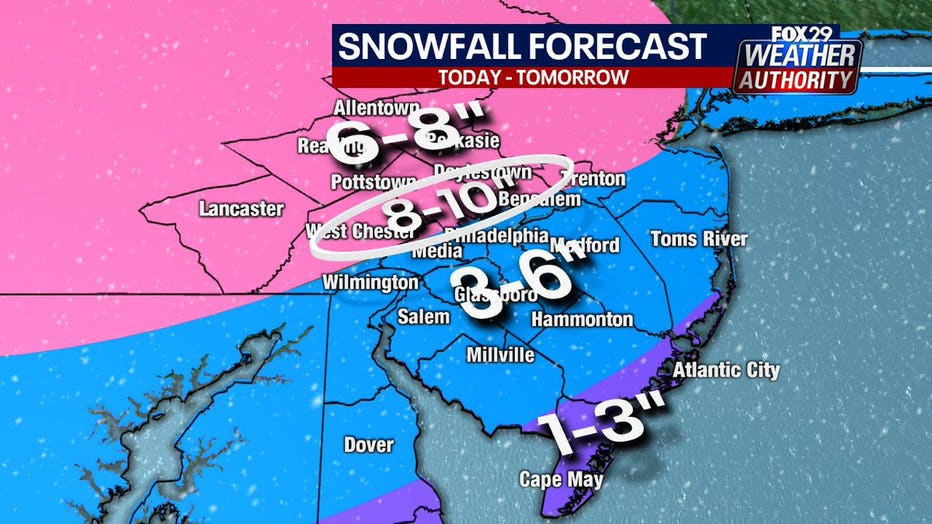 As of Thursday afternoon parts of the region had already reported up to 9 inches of snow. Areas in Bucks County, Chester County and Montgomery County saw accumulations top 8 inches. Meanwhile, across the river in New Jersey, parts of Mercer County measured in with similar snowfall totals.

TIMING OUT THE STORM

The winter storm is not expected to stop until Friday afternoon when it finally pulls offshore. Between now and then the system is forecasted to bring slightly different conditions to different parts of the region.

For the Philadelphia-area and parts of the I-95 corridor, snow is expected to blend with a wintry mix Thursday. How far the rain-snow line advances northward will impact how much snow accumulates in these areas.

The storm hit a lull during the afternoon and early evening with an intermittent blend of light sleet and rain. The second wave of the storm is expected to resume in earnest around 9 p.m. with most of the area getting a wintry mix and some snow overnight.

The last bit of the storm will drag across the region during Friday morning and pull offshore sometime in the afternoon.

Philadelphia issued a snow emergency ahead of the impending storm that was lifted Thursday at 6 p.m.

Temperatures will remain cold over the weekend, but plenty of sunshine is expected on both Saturday and Sunday. A warming trend will begin on Monday as temperatures are expected to exceed 40 degrees with rain. By Wednesday we could see temperatures in the 50s.