Amber Prepchuk's hands remained wrapped for days until it was time to change the dressings. “I almost got sick,” she recalled the moment she saw the blisters.

EDMONTON, Alberta - Beware of the so-called “margarita burn” this summer.

One Canadian woman is warning others after she suffered second-degree burns on her hands from squeezing limes to make cocktails on a recent lake trip. 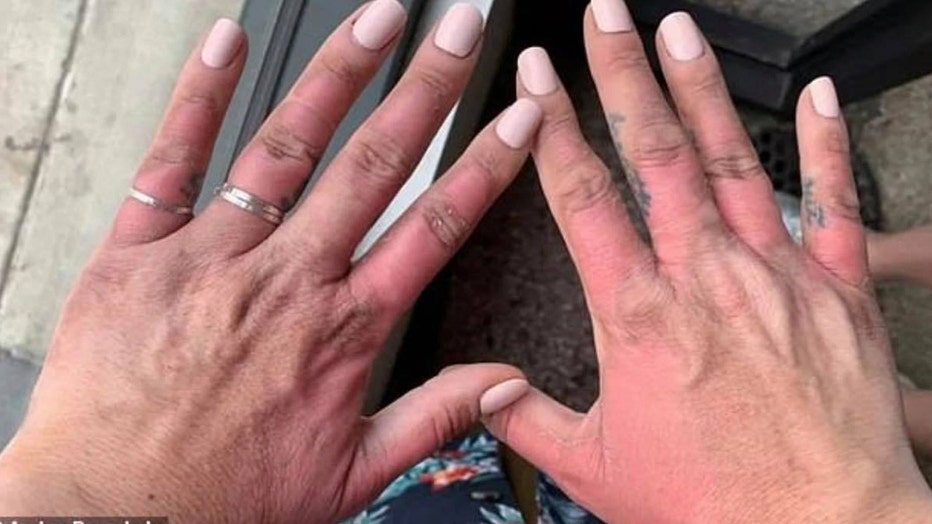 Amber Prepchuk, 34, said she suffered a painful "margarita burn" after squeezing limes to make popular drink and then going in the sun. (Photo Courtesy: Amber Prepchuk via Fox News)

In June, Amber Prepchuk, of Edmonton, Alberta, went to Wizard Lake with friends. Ahead of their walk down to the water, the 34-year-old makeup artist told Fox News on Tuesday that she and a couple of others decided to make a pitcher of margaritas. Unable to find the lime squeezer, Prepchuk offered to squeeze the limes by hand.

Afterward, Prepchuk claims she gave her hands a “good rinse” before she and her friends “continued on with the day in the sunshine.” By the next day, however, Prepchuk said she noticed her hands felt as though they had been sunburned.

The following day, two days after her day at the lake, Prepchuk awoke to what she said was “excruciating” pain.

“I woke with blisters forming in between my fingers and on the tops of my hands,” she added.

Prepchuk then went to the burn clinic at the University of Alberta Hospital, where she claims a doctor was baffled by her burns.

“He almost dismissed me when I told him that the only thing that I could think of was the limes that I had squeezed two days prior,” she claimed, noting her boyfriend then researched lime burns online and came across information on phytophotodermatitis, colloquially known as “margarita burns.”

Per Healthline, margarita burns “result when a chemical called furocoumarin reacts with sunlight. This chemical is found in limes and citrus fruits, along with celery, figs, fennel, and a number of other plants.”

Margarita burn victims typically develop a rash within the first 24 hours of exposure. The rash then can “grow into a cluster of painful blisters at the point of contact a day or two later.” Those affected are typically left with dark patches or streaks — medically known as post-inflammatory pigmentation, according to Healthline — once the swelling reduces. The dark marks can last for weeks or even months.

Prepchuk told Fox News her burns were dressed in gauze and burn cream before her hands were wrapped in what she compared to a pair of boxing gloves. Her hands remained wrapped for days until it was time to change the dressings.“I almost got sick,” she recalled the moment she saw the blisters.

Prepchuk, concerned she would have to put her work on hold due to her injuries, said the pain “was something I had never experienced before.”

“It’s almost overwhelming because it’s not like you just accidentally burned part of your hand on the oven or the stove or something,” she added, describing the sensation in her hands as “being cooked from the inside out.”

“It was tear-inducing,” she added. “Being sunburnt is one thing, but being mild second-degree burned is a whole other sensation.”

Prepchuk — who noted she was unable to move her hands due to the pain and required her boyfriend’s assistance to wash her hair and body when the burn was at its worst — is now advising others to “avoid squeezing limes with your bare hands and then going into the sunshine.” She also said she has burns on other parts of her body — specifically on her stomach and legs — from where she was splattered with lime juice.

“Gloves, lime squeezers, and a good washing of the hands with hot, soapy water," she recommended as ways to avoid a painful margarita burn.