Woman’s freckle on nose turns out to be melanoma

Lisa Ryan said growing up, parents did not know how dangerous sun exposure could be, and they would play outside all day without sunscreen. Her skin also tanned easily.

DES MOINES, Iowa - An Iowa woman discovered earlier this year that a freckle on her nose was actually melanoma, a deadly form of skin cancer, and is now hoping to warn others about the dangers of tanning and the importance of sun protection.

“If I had not been as fixated as I was on tanning, this probably would not have happened,” Lisa Ryan said.

Ryan, who works as a communications director for a senior living organization in Des Moines, first noticed what looked like a “freckle or age spot” years ago. She remembered seeing it while doing her makeup for her daughter’s wedding in 2015, saying that the spot wasn’t big or dark — it was just a “normal looking freckle.”

Over time, the freckle got a little darker and larger. 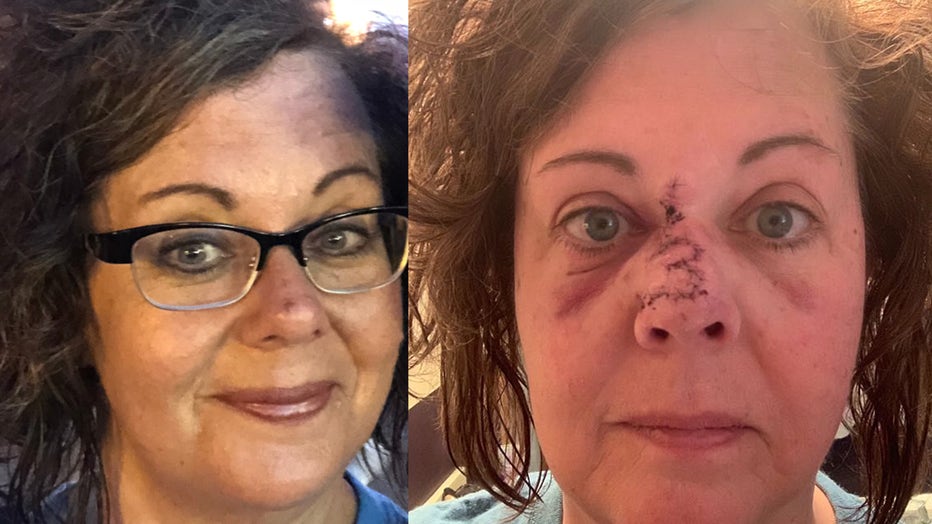 Lisa Ryan is pictured in an image taken in 2017, before her skin cancer diagnosis, alongside a photo during her recovery from three surgeries and reconstruction. (Photo credit: Lisa Ryan)

“I just kept putting makeup on it, and after awhile when there’s something on your face, I think you just kind of stop seeing it,” she said.

Ryan said growing up, parents did not know how dangerous sun exposure could be, and they would play outside all day without sunscreen. Her skin also tanned easily.

“As stupid as it sounds now, I was really proud of the fact that I would get darker than all of my friends and anyone in my family.”

She later began using tanning beds regularly throughout her 20s and 30s.

“I was not at all surprised that I ended up with melanoma. I was just surprised that the melanoma was this innocent-looking freckle that I never thought in a million years could be melanoma.”

Ryan said she has had other moles removed in the past, some that she’d been far more worried about than the spot on her nose. She also knew she was somewhat at risk for skin cancer, having spent so much time in the sun, and would keep an eye out for anything suspicious on her skin.

The ABCDEs of melanoma, a guide to the unusual signs, include asymmetry, border, color, diameter and evolution, according to the American Cancer Society.

In March of this year, she developed a painful cyst on her shoulder in the same spot where her dermatologist had removed a mole a few years prior. Ryan’s normal dermatologist was not able to immediately get her in, so he suggested she try one of their satellite clinics, called Radiant Complexions Dermatology Clinics.

When a nurse practitioner excised the cyst, she also happened to notice the freckle on Ryan’s nose.

“She looked at my face and said how long have you had that freckle on your nose? And I said, ‘Oh, quite a while,’” said Ryan.

The nurse practitioner told Ryan she was concerned it could be melanoma and removed the freckle area from Ryan’s nose for a biopsy.

“Of course, I went online and read everything I could, and by the time the biopsy results were back, I had myself thinking that I had stage 4 melanoma and was going to have to get my affairs in order.”

The biopsy came back as stage 0 melanoma, the earliest stage. She found a reconstructive plastic surgeon, named Dr. Cody Koch, to remove the rest of the lesion from her nose in what’s called a bilobed flap procedure and rebuild the area.

Ryan said they needed to get a margin of healthy skin around the lesion to reduce the likelihood of the melanoma reoccurring.

On April 8, they removed the lesion and the healthy skin around it. She had to return the next day to remove a little more. On April 11, she went in and Koch removed the rest of the problematic area and did reconstruction on her nose.

When they removed the lesion, she was left with a concave divot on her nose “between the size of a dime and a nickel.”

After the three surgeries, Ryan said she healed “very nicely.” Now three months out, there’s no redness or swelling, but you can still see the scars.

“My nose is wider. It’s rounder. We all tend to be so critical of parts of our bodies. My nose was always a part that I didn’t mind too much,” she said.

Ryan said the scar is always there as a reminder, and she feels “incredibly fortunate” for the nurse practitioner’s instinct and the location of her skin cancer.

“Say that the melanoma had been on my chest, or on my leg or on my back, (the nurse practitioner) might not have seen it. She was only really looking at my shoulder,” Ryan said. “Thankfully, it was right on the front of my face.”

Now cancer-free, Ryan has to visit her dermatologist every three months for a full body skin check. Once you have melanoma, you’re at risk for more melanoma, she said.

“I’m just as vigilant as I can be about trying to live a healthy lifestyle,” said Ryan. “There’s a vulnerability that wasn’t there before because I didn’t realize that this did actually open me up to a higher incidence of other types of cancers.”

She now wears sunscreen every day, SPF 30 or higher, on any part of the body that will be exposed to sun.

“If you’re driving in the car and your arm is going to get sun while you’re driving, make sure you have sunscreen on your arm,” she said.

Ryan has two children, now 30 and 27, and said she was “much more vigilant” with them.

“I would put sunscreen on them and not even think about my own skin,” she said.

Ryan said she wanted to share her story to remind others to get their skin checked once a year, and if they have a suspicious spot they’re concerned about, get it checked.

“If I can get one person to go to the dermatologist who might not have gone otherwise, than this isn’t going to be for nothing.”