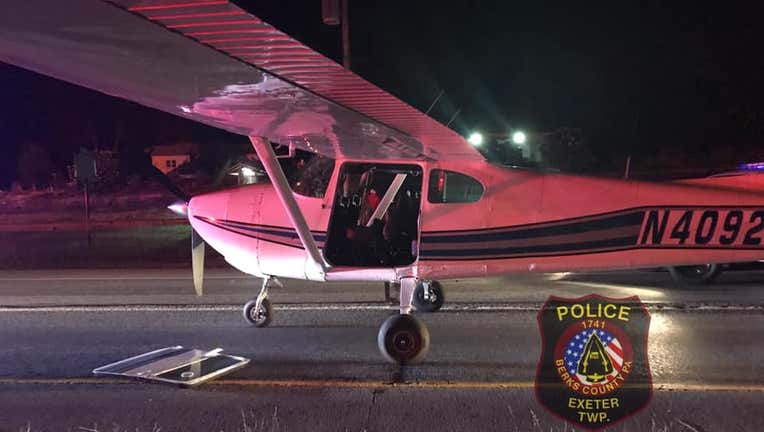 EXETER TOWNSHIP, Pa. - Officials in Exeter Township, Pennsylvania are crediting a young pilot with saving the lives of his two passengers after making an emergency landing.

Police say the engine failed on a Cessna plane and the young pilot was able to land the plane on Route 422 near Daniel Boone Road.

After landing the plane, police say the pilot navigated through vehicles only striking one car which caused minor damage.

Police say they quickly responded to the scene to secure the roadway and ensure the safety of everyone involved.

In a Facebook post, the department dubbed the pilot "#ExeterSully," referencing Chesley "Sully" Sullenberger, the pilot known for safely landing US Airways Flight 1549 in the Hudson River off Manhattan after both engines were disabled by a bird strike.

The Exeter Township Fire Department shared photos of the plane on the highway with the caption "In the realm of, 'you don’t see that every day,' Exeter Fire Police are directing traffic around a plane landing on Rt 422 in Exeter Township."

No injuries were reported, and the road was reopened a short time later.