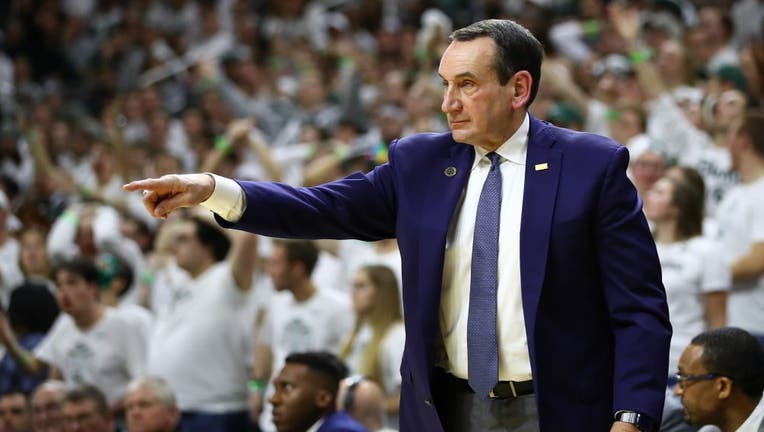 Head coach Mike Krzyzewski of the Duke Blue Devils reacts from the bench while playing the Michigan State Spartans at the Breslin Center on Dec. 03, 2019, in East Lansing, Michigan. (Photo by Gregory Shamus/Getty Images)

The legendary basketball coach is the winningest coach in men’s basketball history with 1,170 victories under his belt.

In his five-decade career, Coach K has won five national championships, appeared in the Final Four 12 times, won the Atlantic Coast Conference Tournament 15 times and finished with the best record in the ACC 12 times.

"My family and I view today as a celebration," Krzyzewski said. "Our time at both West Point and Duke has been beyond amazing and we are thankful and honored to have led two college programs at world-class institutions for more than four decades.

He’s been the Naismith College Coach of the Year three times and has been the head coach of the men’s national basketball team, winning gold at three Olympic games and two FIBA world tournaments.

"That, coupled with 11 unforgettable years as the United States National Team coach, has resulted in a remarkable journey. Certainly, I have been blessed to coach some of the finest young men and greatest players in basketball history as a direct result of these unique opportunities," Krzyzewski said.

Krzyzewski will be replaced by former Duke player Jon Scheyer – who played for Coach K from 2006 to 2010 and was a captain of the 2010 national championship team. He has spent eight years on Krzyzewski's staff and was promoted to associate head coach in 2018.

"Duke University has been a central part of my life for more than a decade, and I could not ask for a better place to continue my career," Scheyer said. "This is absolutely humbling. First, I offer extreme gratitude to the greatest coach of all time whose career is unrivaled in basketball.

Scheyer said Krzyzewski set a standard every coach should strive to achieve "thanks to his unwavering competitive edge, a tireless attention to detail, a family-first approach and a remarkable compassion and care of his players, coaches, and staff."