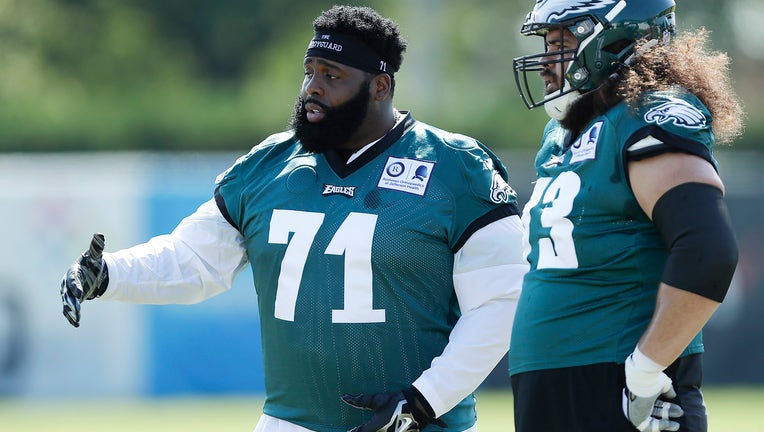 Jason Peters #71 of the Philadelphia Eagles talks with Isaac Seumalo during training camp at NovaCare Complex on August 17, 2020 in Philadelphia, Pennsylvania. (Photo by Yong Kim-Pool/Getty Images)

PHILADELPHIA - The Philadelphia Eagles are showing their appreciation for Jason Peters' decision to move back to left tackle with a restructured contract.

Earlier this week, the team announced Peters approached coach Doug Pederson about returning to the left tackle spot he's held down for the Eagles since 2009.

Peters, a team captain, re-signed with the team this offseason to play right guard after Brandon Brooks went down with a season-ending injury.

He made the move back to left tackle after 2019 first-round pick Andre Dillard suffered a season-ending injury of his own.

The team announced Thursday morning they had restructured Peters' contract. His deal is now reportedly worth up to $8 million with as much as $4 million guaranteed.

Peters has made nine Pro-Bowls as a left tackle, including seven in his time with the Eagles.