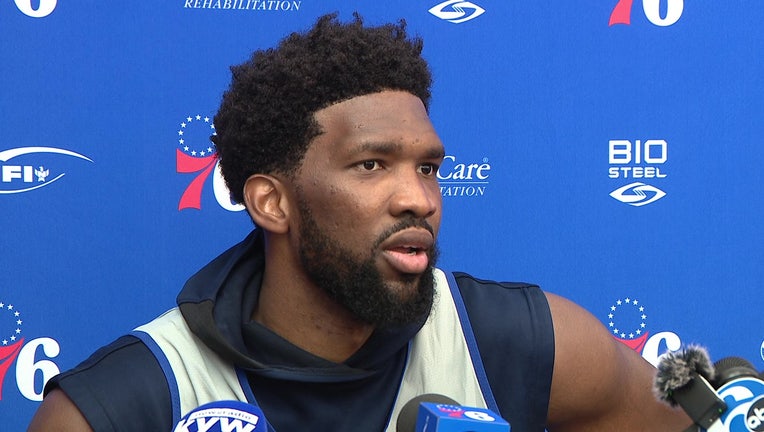 PHILADELPHIA - The 76ers will be without Joel Embiid as they look to extend their six-game win streak Monday night as he has reportedly become the fourth player to enter the leagues health and safety protocols.

The Athletic’s Shams Charania reports that Embiid was scheduled to sit out Monday’s game for a planned rest day, but has since entered the health and safety protocol.

Charania reports that Embiid could miss several games while in protocols, as he could be away from the team for up to 10 days. He can return sooner if he tests negative twice in a span of 24 hours.

Embiid is now the fourth 76ers to enter the league's protocols, as Tobias Harris, Matisse Thybulle, and Isaiah Joe have all missed games for the same reason. Harris has tested positive for COVID-19 and has been symptomatic, according to head coach Doc Rivers.

"He’s doing OK but not great, honestly. ... It hit him for sure," Rivers said last week. "A lot of guys have had this and they are mad, like ‘What the hell, I’m fine.’ Tobias is not in that category right now, I can tell you that."

The Sixers have been able to overcome those absences, as well as injuries to Furkan Korkmaz and Danny Green. Ben Simmons also remains out.

Monday night, the Sixers will also be looking to extend a four-game winning streak at home with Tyrese Maxey and Seth Curry as the only members of the opening night starting lineup.

The NBA told its players, coaches, and referees on Sunday that they should receive booster shots against the coronavirus, with particular urgency for those who received the single-dose Johnson & Johnson vaccine.

The league and the National Basketball Players Association — working jointly based on guidance from the NBA’s public health and infectious disease experts — said those who received Johnson & Johnson shots more than two months ago should get a booster. The booster recommendation also was made for those who received the Pfizer and Moderna vaccine at least six months ago.

Data used to make the league's determinations showed that antibody levels for Pfizer and Moderna recipients wane after six months, and after two months for Johnson & Johnson recipients.

Some teams already have been planning for players to receive booster shots when available.