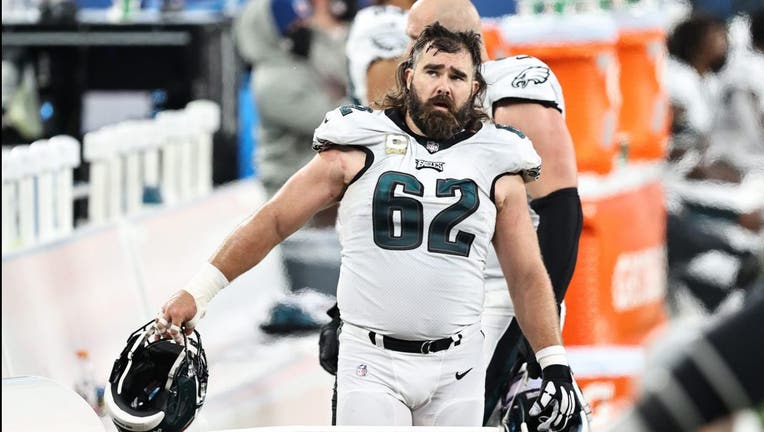 Jason Kelce #62 of the Philadelphia Eagles reacts during the second half against the New York Giants at MetLife Stadium on November 15, 2020 in East Rutherford, New Jersey. The Giants won 27-17. (Photo by Elsa/Getty Images)

Coach Doug Pederson benched Jalen Hurts for Nate Sudfeld in the fourth quarter of a 20-14 loss to Washington on Sunday night. Washington's victory secured them a playoff spot as a 7-9 NFC East champion over the 6-10 New York Giants, who would have won the division crown with an Eagles victory.

The loss gave the Eagles the sixth pick in the NFL draft. A victory would’ve dropped them to the ninth spot.

After the game, reports surfaced about players, including Kelce, confronting Pederson over the decision to bench Hurts, who had run for two touchdowns so far, in favor of Sudfeld when victory was still within reach.

On Wednesday, Kelce told his side of the story and explained that "at no point was anything from me or anyone else confrontational."

Pederson had publicly stated leading up to the game that Sudfeld was likely to see the field, and Kelce confirmed the team knew the third-stringer was told to "be ready to play."

Kelce says he learned Sudfeld would be taking over while on the bench at the end of the third quarter and only approached Doug to confirm the news and asked if everyone else was staying in the game.

After confirming with Pederson, Kelce says he and the offensive line began working with Sudfeld on the sideline.

"All of us during the week leading up were excited for Nate, a guy that has been with us for 4 years to get an opportunity in a real game to show what he can do," Kelce wrote. "We all have complete confidence in Nate as a player, there's a reason he's been here this long, and a reason the team brought him back. And that's because we feel like Nate is a guy we can win with."

Kelce admitted that despite knowing Sudfeld was likely to play, he was a "little surprised given the circumstances that the move happened when it did." He reiterated that the team did their best and "all of us believe we can win with Nate Sudfeld.

He also took the blame for a snap to Sudfeld that resulted in a fumble.

Pederson's decision to bench Hurts didn’t go over well with the Giants and other NFL players who posted their reactions on Twitter.

"To disrespect the effort that everyone put forward to make this season a success for the National Football League, to disrespect the game by going out there and not competing for 60 minutes and doing everything you can to help those players win, we will never do that as long as I’m the head coach of the New York Giants," Giants rookie head coach Joe Judge said Monday.

Sudfeld hadn’t thrown a pass since 2018 and threw an interception on his second pass. He also lost the fumble Kelce said was the result of a bad snap.

"Yes, I was coaching to win," Pederson said. "Yes, that was my decision solely. Nate has been here four years and I felt he deserved an opportunity to get some snaps."

The loss capped a 4-11-1 campaign for Philadelphia and the Eagles missed the playoffs for the first time since Pederson’s first season in 2016. They face several important decisions in the offseason, starting with their quarterback dilemma. Carson Wentz’s $128 million, four-year contract extension kicks in next season. The team would have to absorb a significant cap hit by trading him.