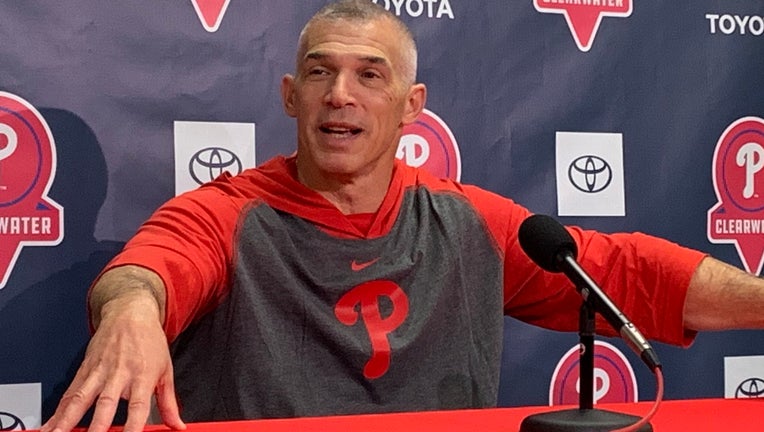 Scherzer threw his glove and hat to the grass, then stared down Girardi after getting checked for a third time by umpires for sticky stuff in Washington’s 3-2 win.

Major league umpires began a crackdown on Monday by regularly examining pitchers for tacky substances that can give them a better grip on the baseball. Managers also can request a check, although umps can deny it if they believe it’s not in good faith.

Girardi said he became suspicious because Scherzer was touching his hair more than usual on the mound. Scherzer said he did that because he couldn’t grip the ball and needed moisture on his fingers. He also said he got tired of tasting rosin.

"He’s a con artist," Rizzo said of Girardi. "He’s been doing that for years on TV."

Phillies President Dave Dombrowski defended his manager, who was ejected after he left the dugout when Scherzer stared him down.

"That’s not Joe Girardi," he said. "It’s totally improper for (Rizzo) to say that. ... Joe Girardi is the farthest from a con man of anybody that I know. He’s a very sincere individual. He was within his rights."

Dombrowski added that he called Commissioner Rob Manfred’s office about the issue. MLB has consulted with the umpires and determined Girardi’s request was legitimate.

Nearly 200 pitchers have been checked across the majors since the enforcement began.

When he was examined for the third time, Scherzer unbuckled his belt. Umpire crew chief Alfonso Marquez said he told the three-time Cy Young Award winner not to unhitch his pants.

"Immediately I spoke with him and I said, ‘Hey, don’t get ejected over this. Let us just do our job and then we’ll be fine,’" Marquez said.

Scherzer gave up one run and two hits in five innings, striking out eight.

"I love Joe Girardi," Rizzo also said in his radio interview. "I’ve seen him play since he was in high school at Peoria, Illinois, scouted him at Northwestern. I know him well. But, I know him well."