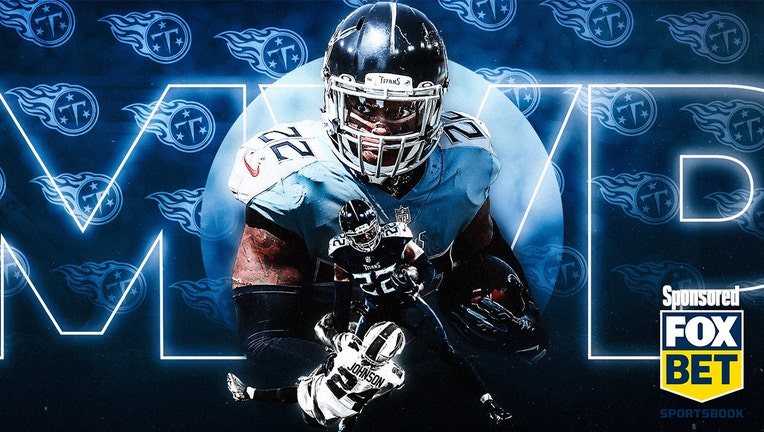 The list of non-quarterbacks who've been awarded the NFL's Most Valuable Player trophy has some legendary names on it, and most of those non-QBs cemented their legacies as unstoppable running backs: Terrell Davis, Adrian Peterson and Walter Payton, just to name a few.

This year, Tennessee Titans' running back Derrick Henry could be added to that incredible list.

Currently, Henry sits at +2500 to win MVP at FOX Bet (bet $10 to win $260.00 total). He's the first non-quarterback that appears on the list. Arizona Cardinals quarterback Kyler Murray is the favorite, sitting at +425.

To show you just how dominant Henry has been, the next running back on the MVP list is Dallas Cowboys running back Ezekiel Elliot, whose odds to win the award sit at +11000.

Once you look at the kind of year the 'back from 'Bama is having statistically, it's easy to understand why his stock is rising. Henry leads the League in rushing, averaging 27 carries and 130.5 yards per game. Through 6 weeks, he's run for 10 touchdowns. And get this. In the Week 6 Monday Night Thriller in the Titans' matchup against the Buffalo Bills, Derrick Henry ripped and ran all over their defense racking up 143 yards on 20 carries. The Bills were favored to win at -6. The final score was Titans 34, Bills 31.

In 2019 and in 2020, Henry was named the NFL's leading rusher. Also in 2020, he was named Offensive Player of the Year. This year, he's breaking records as the NFL's fastest player. In that same Monday night game against the Bills, on a 76-yard run for a touchdown, the 2015 Heisman Trophy winner was clocked at a speed of 21.8 miles per hour.

He carries the rock, and he carries it fast.

Speaking of records, the single-season rushing record of 2,105 yards was set by Los Angeles Rams' Eric Dickerson in 1984. If Henry breaks that, his name will certainly catapult to the top of this conversation.

What will determine if Henry runs away with being named the League's most valuable player? According to FOX Bet content integration specialist Jacob Blangsted-Barnor, it all comes down to what the quarterbacks around the NFL don't do.

"Derrick Henry started out the season 35-1, moved as far out as 50-1 which was mainly due to QBs starting well," Blangsted-Barnor said. "But now he’s back in the mix.

"It’s a tough one because we all know how tough it is to win as a non-QB. Ultimately I think it comes down to whether any QB has an unbelievable season. If they don’t and Henry can break the rushing record again - which he is on pace to do - then he certainly has a chance."

"I think he will be in the conversation much like last year. When you are betting Henry, you are more betting that the likes of Kyler Murray, Tom Brady and Josh Allen don’t have flawless seasons. Pair that with Henry being 200 yards and 5 rushing TDs clear of the next RB and there’s every reason to like this bet."

The 4-2 Titans still have on their schedule games against Kansas City whose defense allows 29.3 points per game and Jacksonville whose d gives up 28.7 points per game. So Tennessee's favorite rusher certainly has more chances to state his case to be in contention for top honors.

So are you betting on the ‘back to win you some big bucks?