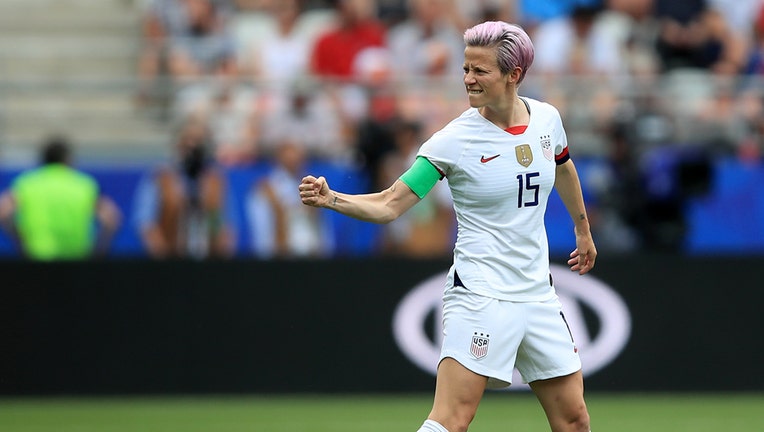 NEW YORK - Setting itself apart from other great American sports teams, the U.S. women's soccer team is embracing a front-line role in social justice causes even as it savors a fourth world championship.

The players are now world leaders in the push for gender equity in the workplace, having sued the U.S. Soccer Federation for equal pay and treatment vis-a-vis the men's national team. With a lesbian coach and several lesbian players, including World Cup MVP Megan Rapinoe, they're a proud symbol of LGBTQ inclusion. And they have stood firmly behind Rapinoe after she said she'd refuse to visit the White House if invited by President Donald Trump.

Far from being daunted by these off-the-field roles, the players seem to relish them.

"I feel like this team is in the midst of changing the world around us as we live, and it's just an incredible feeling," Rapinoe said after the team's 2-0 victory over the Netherlands in Sunday's title match in Lyon, France. The team won all seven of its matches, scoring 26 goals, allowing just three.

Individual athletes - notably Muhammad Ali, more recently Colin Kaepernick - have risked their careers in the past by taking political stances. Some teams in the NBA and WNBA wore warm-up outfits a few years ago protesting police brutality and supporting the Black Lives Matter movement.

But it's difficult to think of another high-profile U.S. team sticking its neck out, in the run-up to its most important competition, the way the women's soccer team did by suing the USSF in March. The two sides have agreed to mediate the lawsuit now that the World Cup is over.

"These athletes generate more revenue and garner higher TV ratings but get paid less simply because they are women," said Molly Levinson, spokeswoman for the players in their lawsuit. "It is time for the federation to correct this once and for all."

Debra Katz, a Washington attorney who specializes in sexual harassment cases, said the U.S. team had earned global support for the causes it is embracing.

"Their message is, 'You're not going to divide us. We're united for nondiscriminatory treatment for all of us.'"

The victory in Lyon, coupled with the drive for equal pay, will further entrench the U.S. team as a symbol for female athletes elsewhere. Indeed, Title IX, the 1972 federal legislation that required equal sporting opportunities for girls and women, has benefited not only the top U.S. players but also many World Cup players from other countries who honed their skills on U.S. college teams.

For LGBTQ Americans - many of them frustrated by the lack of openly gay players in major league baseball, the NFL, NBA and NHL - the women's soccer team has been a source of pride and celebration. Two of its players, Ashlyn Harris and Ali Krieger, are engaged to each other. On hand as a spectator in Lyon was Rapinoe's girlfriend, WNBA star Sue Bird.

A spokeswoman for the largest U.S. LGBTQ-rights organization, Matilda Young of the Human Rights Campaign, said the impact of the team's inclusiveness would be profound.

"Young LGBTQ athletes, who all too frequently are made to feel unwelcome, have seen themselves reflected in these history-making champions," Young said. "Having Americans from every corner of our country embrace these women who are unabashedly proud of their country and of who they are sends a powerful message not only to LGBTQ people, but to sports fans around the world that we are here, we are queer, and we just won the World Cup - again."

Congratulations to the team came from a wide array of celebrities and politicians, including Trump and many of the Democratic presidential candidates hoping to defeat him. One of them, New York Mayor Bill de Blasio, swiftly arranged for the team to have a victory parade Wednesday through the Canyon of Heroes in Manhattan.

"Congrats to the record breakers on the @USWNT, an incredible team that's always pushing themselves—and the rest of us—to be even better," tweeted former President Barack Obama. U.S. Rep. Alexandria Ocasio-Cortez, the New York Democrat with a huge following on social media, tweeted "At this point we shouldn't even be asking for #EqualPay for the #USWMNT. We should demand they be paid at least twice as much."

On Monday, the top Democrats in Congress invited the team to the Capitol "to celebrate their inspiring victory," House Speaker Nancy Pelosi said.

At the National Women's Law Center in Washington, the U.S. team's victories and outspokenness were welcomed by a staff that has campaigned vigorous for equality in the workplace and on the playing field.

"This team is so dominant because they work together - they lift each other up," said Sabrina Stevens, the center's senior manager of campaign and digital strategies.

"It resonates for so many of us - women especially - to work your heart out and be so good at what do, and still not get the pay or recognition you deserve," she said. "We're rooting for them because we're rooting for ourselves."