FOX 29's Sue Serio says we can expect some of that heat and humidity to return to start the day, but by Thursday evening, we'll be seeing some of the rain from Elsa.

PHILADELPHIA - Tropical Storm Elsa made landfall in the Big Bend region of Florida late Wednesday morning, and it will continue to pose threats of flooding rainfall, gusty winds and isolated tornadoes along much of the East Coast as it moves northward through the end of the week.

Now, tropical storm warnings have been issued from North Carolina to Massachusetts as the mid-Atlantic and Northeast brace for Elsa late this week. This includes the Jersey Shore and Delaware beaches.

The National Hurricane Center was predicting additional rainfall amounts of 1 to 3 inches, with storm totals of 4 to 8 inches, across northern portions of the Florida Peninsula through Wednesday night. This might result in considerable flash and urban flooding, as well as minor to isolated moderate river flooding, the NHC said.

Tropical-storm-force winds (39-plus mph) were expected to spread into coastal Georgia and South Carolina Wednesday night into early Thursday.

Authorities in Jacksonville, Florida, said one person was killed when a tree fell and struck two cars. The National Weather Service reported 50 mph wind gusts in the area.

In southeast Georgia, a suspected tornado touched down at a park for recreational vehicles at Naval Submarine Base Kings Bay in Camden County, the naval base confirmed to FOX Television Stations. Several people reportedly suffered injuries.

The latest forecast from the NHC has Elsa weakening to a tropical depression over the Carolinas on Thursday, then restrengthening back into a tropical storm by Thursday night or early Friday as it moves through the mid-Atlantic. The center of Elsa is projected to be positioned over or just offshore of New Jersey Friday morning, then it will quickly accelerate toward southern New England Friday afternoon. 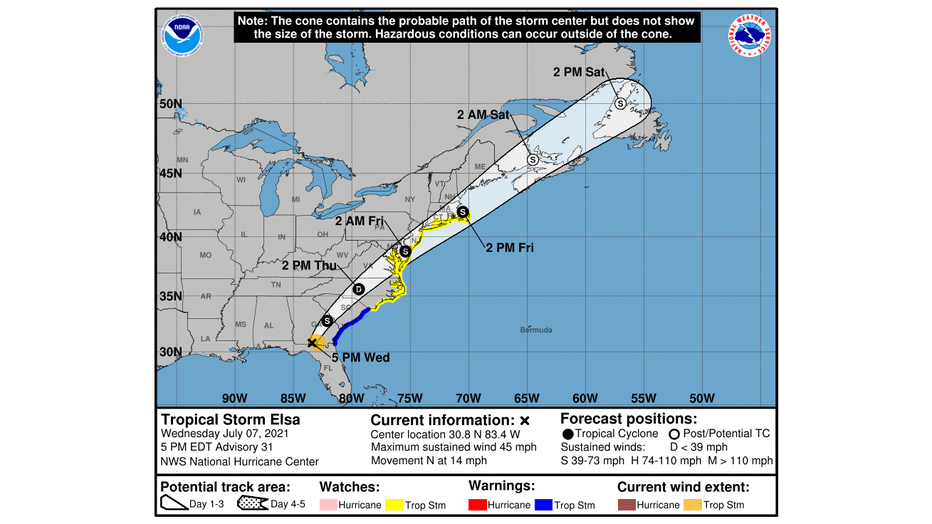 "Guidance has continued to shift slightly west with the track of Elsa, with the consensus track now taking the low over portions of Delmarva and then into NJ Thursday night into Friday morning," the NWS office in Mount Holly wrote in its Wednesday afternoon forecast discussion. "Given this shift in track, the threat to our area has increased and thus a tropical storm watch is in effect for coastal NJ, southern Delmarva and adjacent marine zones."

Given the current track, the NWS expects that tropical-storm-force winds will largely be confined to the immediate New Jersey and Delaware coasts, with the heaviest rainfall largely focused along Interstate 95 and points south and east. However, any additional westward shifts in the track of Elsa would bring stronger winds farther inland and shift the heaviest rainfall farther inland, the NWS noted.

The NWS zone forecast for Cape May County in New Jersey was predicting "tropical storm conditions" and wind gusts up to 40 mph Thursday night and Friday. These winds will be capable of knocking down a few power lines and tree limbs.

A flash flood watch has been issued by the NWS for our entire viewing area from noon Thursday to noon Friday.

The NWS also said there is an elevated risk of rip currents at the Jersey Shore and Delaware beaches Thursday and Friday as Elsa tracks up the Eastern Seaboard.

DOWNLOAD: Get the FOX 29 Weather Authority app for the latest forecasts and conditions

It's advised that you stay out of the water until the threat for rip currents wanes. As of July 6, 49 people had already lost their lives to rip currents in 2021.

The NHC was forecasting 1 to 3 inches of rain, with localized totals up to 5 inches, across much of the mid-Atlantic and New England Thursday into Friday. This could result in flash and urban flooding over parts of the area. NOAA's Weather Prediction Center has placed our entire region under a slight risk (level 2 out of 4) of flash flooding Thursday through Thursday night. 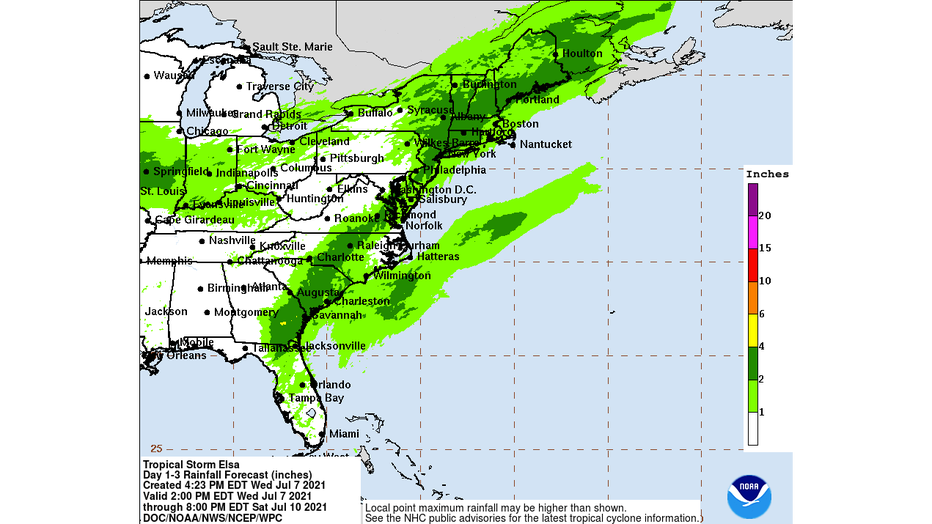 Climatologist discusses recent trend of wicked weather across the country