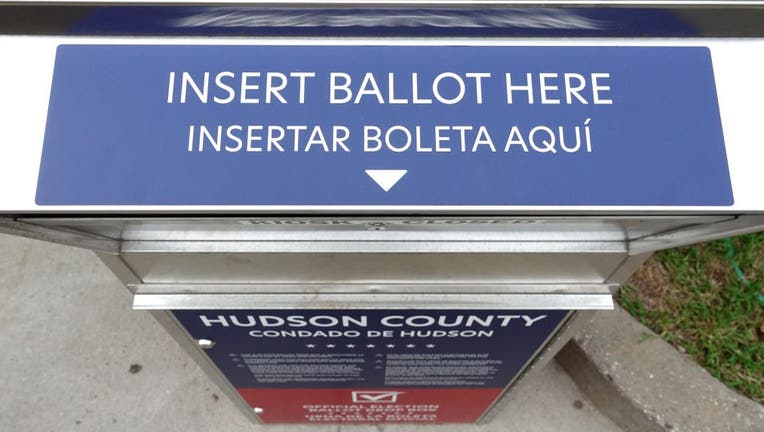 This year New Jersey will be conducting their election mostly by mail, with every registered voter set to receive a mail-in ballot. (Photo by Gary Hershorn/Getty Images)

New Jersey also has one other statewide race: Sen. Cory Booker, a Democrat, is running for reelection. All seats in the U.S. House of Representatives are on the line, as well. Several state Senate and state Assembly seats are also on the ballot.

New Jersey voters will also have to consider three referendum questions. The big one is over recreational marijuana use. The others are about property taxes and redistricting as related to the U.S. Census.

This year New Jersey will be conducting their election mostly by mail, with every registered voter set to receive a mail-in ballot. If it hasn’t arrived by October 12, track your mail-in ballot status online at Vote.NJ.Gov or contact your County Clerk, listed on the County Election Officials page.

Registered New Jersey voters can still vote in person between 6 a.m. and 8 p.m. at a select number of polling locations. Those who opt to vote in person will be provided with a provisional paper ballot.

Voters can also return your vote-by-mail ballot at your designated polling place on Election Day. You can also drop them at a secure drop box location.

Here is a summary of the candidates and questions:

Note: These candidates qualified for the New Jersey ballot but did not make it onto the ballots of enough states to win a majority in the Electoral College: Don Blankenship, Roque "Rocky" De La Fuente, Bill Hammons, and Gloria Estela La Riva.

You can learn more about the candidates at Ballotpedia.org, a nonprofit and nonpartisan reference on American politics and elections.

The Public Questions, a.k.a. referendum questions, are proposed changes to the state's constitution. Voters choose either "Yes" to support the change or "No" to oppose the amendment.

In 2019, New Jersey looked poised to legalize the recreational use of marijuana with support from Gov. Phil Murphy and the leaders of the Assembly and Senate, all Democrats. But they failed to get enough lawmakers on board. Instead, Trenton agreed to put the issue directly to voters.

If the measure passes, the state's constitution would be amended, and the commission that oversees the medical marijuana program would also establish the market for recreational use.

NJ Can 2020, a coalition of groups, supports the effort and plans a digital ad campaign to encourage voters to pick "Yes." On the other side, a group called Don't Let NJ Go To Pot opposes the question and urges a "No" vote.

Text of the question: Do you approve amending the Constitution to legalize a controlled form of marijuana called "cannabis"? Only adults at least 21 years of age could use cannabis. The State commission created to oversee the State's medical cannabis program would also oversee the new, personal use cannabis market. Cannabis products would be subject to the State sales tax. If authorized by the Legislature, a municipality may pass a local ordinance to charge a local tax on cannabis products.

You can learn more about this ballot question at ballotpedia.org.

You can learn more about this ballot question here.

Every 10 years, the federal government, via the U.S. Census Bureau, counts everyone in the United States. The feds compile the data and release it to the states, which then redraw their legislative districts.

Under the New Jersey constitution, a state commission is required to pass a legislative redistricting plan within a month of getting the census data. Under federal law, the Census Bureau's deadline to do this is April 1, 2021. But that may not happen. Reason: the coronavirus pandemic.

The Census Bureau has asked Congress to extend the deadline to July 31, 2021, due to delays blamed on the pandemic. If that happens, New Jersey would not be able to redraw districts in time for the state's primaries for the Nov. 2, 2021, general election.

This ballot question asks voters for permission to postpone redistricting until after the 2021 election if (and only if) the state receives the federal census data after Feb. 15, 2021.

Text of the question: Do you approve amending the Constitution to change when new legislative districts are created if the federal census data is delayed? The current COVID-19 pandemic has delayed census data collection. If New Jersey does not receive the census data in a timely manner, new legislative districts may not be ready in time for State legislative elections in the year ending in one. This change to the redistricting schedule will allow legislators to be elected that year from their existing districts for their two-year term in office. The new districts will be used starting with the next scheduled general election for the State legislature.

You can learn more about this ballot question here.