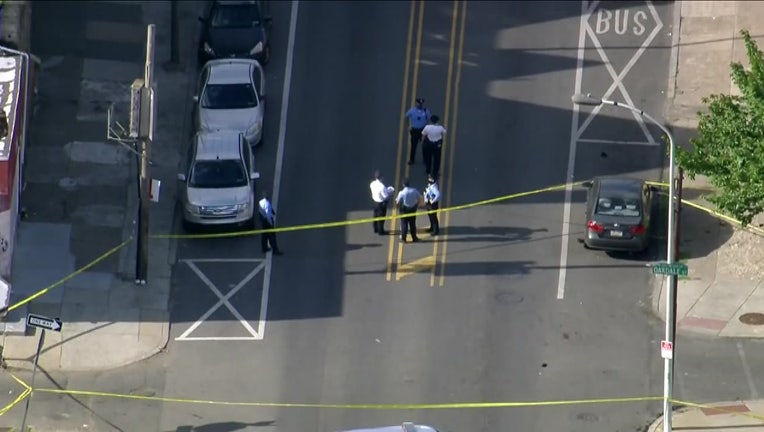 SKYFOX flew over the scene of a shooting that left a man dead in North Philadelphia.

PHILADELPHIA - Two people were killed and five were wounded as the gun violence continued in Philadelphia Monday following a violent Mother's Day weekend.

Police say a double shooting on the 3100 block of Jasper Street left a 20-year-old man dead and a 28-year-old wounded in Kensington around 4 p.m.

A second double shooting was reported on the 3400 block of North Howard Street in the city's Fairhill neighborhood at 4:56 p.m. A 72-year-old was shot once in the cheek and a 45-year-old man was shot multiple times throughout the body.

Violence continues to plague Philadelphia. Over the weekend, seven people were left dead and more than a dozen injured in shootings across the city.

Police were called to North 29th and Oakdale streets in North Philadelphia at 5:02 p.m. for a third shooting. According to police, a 20-year-old was shot multiple times. He was taken to Temple University Hospital where he died.

Police were also called to the 1200 block of South 57 street at approximately 10:42 p.m. for  a man found shot inside the passenger seat of his vehicle. The 25-year-old's phone was tracked by his girlfriend. When police arrived, they found him dead.

A 17-year-old boy was shot in the face on the 5000 block of Wade Street in the city's Germantown section around 7:35 p.m. He was taken to the hospital in critical condition.

Police were called to a fifth shooting on the 3800 block of Wyalusing Avenue shortly before 8 p.m. A 31-year-old man was shot in the knee. He was taken to the hospital in stable condition.

So far, no arrests have been made in any of the shootings.