PHILADELPHIA - Gun violence continued to plague Philadelphia on Mother's Day as local authorities reported at least three people were killed and nearly a dozen were injured in shootings across the city.

Officers from the Philadelphia Police Department said a young man was killed when a shooter opened fire on a car with three people inside in North Philadelphia. A second man,  a 19-year-old, died later at the hospital. The triple shooting happened just after 1:30 p.m. on the 2800 block of North 21st Street, according to police.

FOX 29's Brad Sattin has more on a violent weekend in Philadelphia.

One victim, a 19-year-old man, was reportedly shot eight times in the torso and taken to Temple Hospital by police in extremely critical condition. Officers also drove an 18-year-old man to Temple with a non-fatal gunshot wound to the arm.

Investigators have not said what sparked the deadly shooting. Police have not reported any arrests or given a description of the shooter.

Hours later, officers in Olney said two people, including a 17-year-old boy, were killed after gunfire erupted on the 100 block of East Albanus Street around 4 p.m. Three additional victims were driven to Albert Einstein Hospital with non-life-threatening injuries.

Earlier that day, a man was shot to death and killed in what police say was prompted by a robbery. The incident happened on Granite Street. 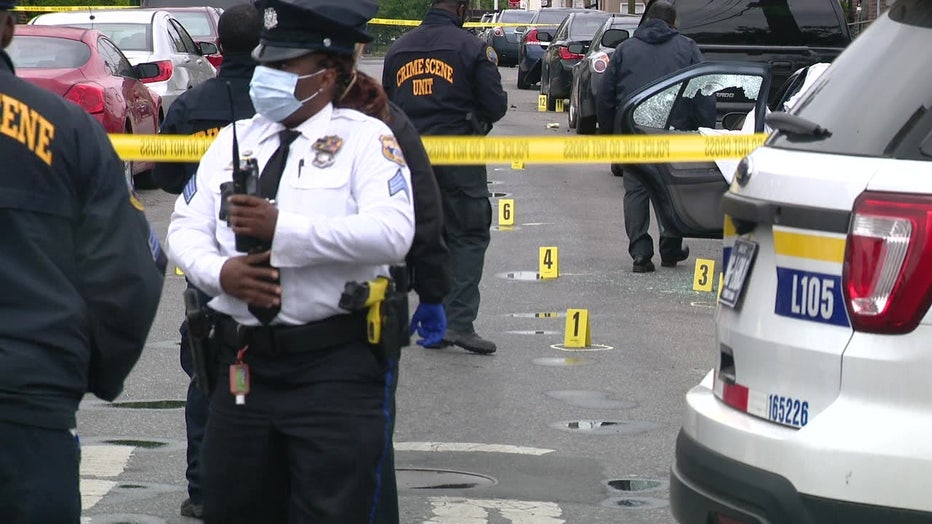 1 young man was killed and two others were hurt during a triple shooting Sunday in North Philadelphia, according to police.

Police on Sunday afternoon said a 34-year-old man was driven to the hospital after he was shot multiple times in the body on the 2200 block of Cecil B Moore Avenue. His condition is unknown, according to officers.

Sunday afternoon's shootings topped an already violent Mother's Day in Philadelphia that began with two people hurt by gunfire in the southwestern part of the city. Officers said a man and woman arrived at Penn Presbyterian Hospital after being shot near the intersection of 54th and Woodlawn Streets just after midnight.

Both victims, ages 37 and 44, are expected to recover according to police. Authorities are working to investigate the events surrounding the shooting.

Also in Southwest Philadelphia on Sunday, a non-fatal shooting on the 2600 block of Felton Street lead to a brief barricade situation that ended with an arrest. Officer said the suspect ran into a residence after a man was shot once in the left leg.

Officers in Kensington said a 28-year-old man is expected to survive after he was shot in each leg while sitting inside a parked car on Sunday afternoon. Police did not report any arrests.

Also in Kensington just before midnight, a triple shooting left two injured and one man dead. It happened on the 800 block of East Allegheny Avenue. Police are investigating but at this time they have no motive or suspect.

According to the latest data from the Philadelphia Police Department, the city is experiencing a 32% increase in homicides; many of which have stemmed from gun violence. Local and federal authorities have ramped up their relationship recently in an effort to turn the tide on violent crime in Philadelphia.

"The collaboration with our federal partners and the knowledge and resources that these federal agencies provide, are crucial assets to any department," Police Commissioner Danielle Outlaw said. "We will continue to work with our federal, state, and local agencies to increase the quantity of our investigatory work and ultimately, strengthen these cases with federal consequences."

Meanwhile, Mayor Jim Kenney on Sunday night said he is "devastated by the unspeakable violence that occurred this weekend" and said assured that his administration is working to quell gun violence in the city.

"My thoughts are with the victims and their families during this tragic time, and I want all Philadelphians to know that our Administration does not take this issue lightly," Kenney said. "No priority is greater for us than reducing violence and creating a safer and more just city for us all."

Police: Man in critical after being stabbed in the face, chest during a robbery in Southwest Philadelphia

Man, 20, dies after being shot in the head in Ogontz, police say