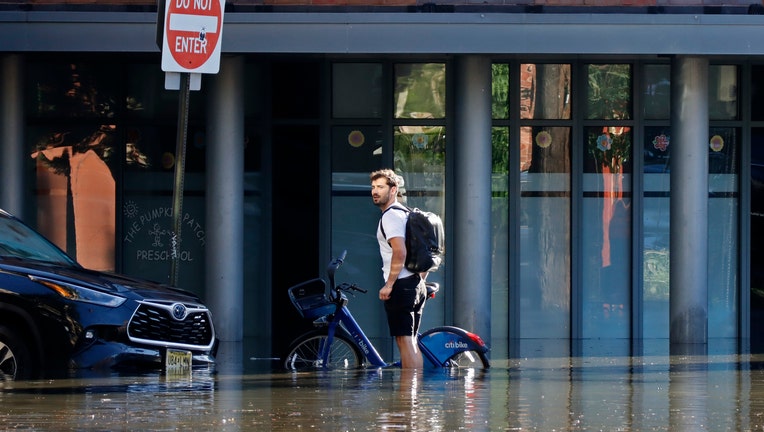 HOBOKEN, NJ - SEPTEMBER 2: (EDITOR'S NOTE: Alternate crop) A person stands in a flooded street the morning after the remnants of Hurricane Ida drenched the New York City and New Jersey area on September 2, 2021 in Hoboken, New Jersey. (Photo by Gary

TRENTON - Ten New Jersey counties will now receive aid from the federal government after the remnants of Hurricane Ida rocked the state last week leaving a wake of widespread destruction.

"Residents now have access to the federal help they need to rebuild," Murphy said in a tweet that teased the possibility of additional declarations.

New Jersey was among several northeastern states that were bowled over by a powerful storm system that once made up Hurricane Ida. Murphy said 23 people were killed during the mighty storms that brought intense flooding to the northern counties and spawned a destructive EF-3 tornado in the southern part of the state.

Days after the storms, President Joe Biden toured the wake of destruction left in Manville, New Jersey. Biden walked along a street in the Lost Valley neighborhood where flooding is common and the cleanup continues after the Raritan River overflowed its banks.

Many front lawns were covered with waterlogged couches, broken pianos, crumbled plaster and other debris. One home displayed a hand-painted sign that said, "Manville will be back better."

Biden, wearing a mask, spoke to adults and children, including Meagan Dommar, a new mother whose home was destroyed by fire as the flood occurred. She told him that she and her husband, Caesar, had left with the baby before the flooding, then returned to find destruction.

"Thank God you’re safe," Biden replied. She said afterward she hoped the visit would speed help "along a little bit" and said she was grateful for the visit.