PHILADELPHIA - A Philadelphia high school student received the surprise of a lifetime from Allen Iverson.

Diamond Johnson is a star at Neumann Gorretti High School – located in South Philadelphia – and set to graduate with the class of 2020.

In a tweet shared Monday, Iverson shared a video showing him personally facetiming with Johnson to invite her to his Classic.

“Be tough in that gym and be tough outside of it,” Iverson told the team. Then his business partners personally invited her to play in the classic.

Johnson was visibly emotional when she received the invite since it’s a significant honor.

The 24K Showcase at the Iverson Classic has historically been played with all men.

Johnson will be the first woman to integrate the game at this level, according to Classic officials.

Diamond Johnson, a senior at the catholic high school, is an MVP of the Philadelphia Catholic League and was ranked a #14 recruit by ESPN for the Class of 2020. 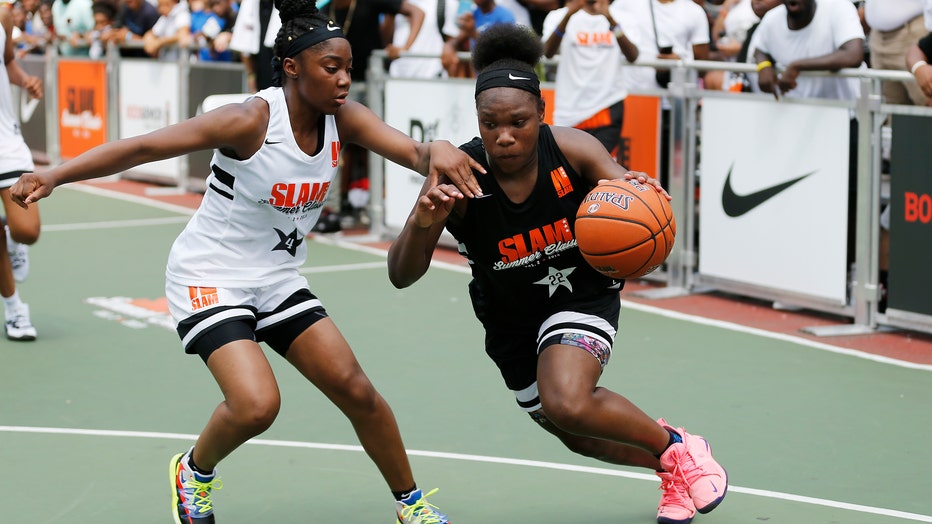 Diamond Johnson, #22 of Team Next, drives to the basket during the SLAM Summer Classic 2019 girls game.(Photo by Michael Reaves/Getty Images)

And while this is a significant milestone for Johnson, she is no stranger to receiving incredible honors.

In March 2019, Johnson was named the Gatorade Pennsylvania Girls Basketball Player of the Year.

“Diamond Johnson is pretty much unstoppable,” said Beulah Osueke, head coach at West Catholic High. “She’s small and quick, she’s got a deadly floater and she can shoot from well behind the line. She changes the entire dynamic of that team.”

Johnson has signed on to play at Rutgers University when she graduates and heads to college.

Diamond Johnson and her coach Andrea Peterson joined FOX 29’s Good Day Philadelphia in studio to celebrate the news of her incredible honor.

"I was really shocked," Johnson told Alex Holley and Mike Jerrick. "Then don't usually put boys and girls together so it was a surprise."

The game, which is April 22nd at the Philadelphia 76ers Fieldhouse, brings together future basketball stars.

Johnson was surprised by Iverson's invitation, but Coach Peterson said it wasn't a surprise to her since Johnson is such a hard worker.

"She deserves it. This kid works hard day in and day out," Coach Peterson told Good Day. "This young lady really puts a lot of time and effort in. For anyone to break barriers, it's definitely going to be Diamond Johnson."

Diamond Johnson, who will be the first woman to play in Allen Iverson's 24K Showcase Classic, shows Good Day Philadelphia her basketball skills.

​​The 24K Showcase is a full-length game that features top ranked talent and participants are selected without regard to class.

Kobe Bryant was deeply committed to elevating women in sports and offering them pathways to put womens' basketball on the same level as mens'.

His daughter Gianna played basketball and was devoted to being a trailblazer for womens' basketball before her tragic passing.

Bryant deemed himself a "girl dad" and was extraordinarily proud of his daughters. "Girls are the best," Kobe Bryant told ESPN's Elle Duncan, which she recalled in a moving tribute after learning of his death.

Like the entire basketball, Allen Iverson was "devastated and heartbroken" by the deaths of Kobe and Gianna Bryant.

“It goes so much deeper than that for me,” Iverson wrote. “The story of us being drafted in arguably the deepest class of its kind ever in the history of the NBA can be debated for many years to come. However, his generosity and respect for the game is something that I witnessed first-hand every time we stepped on the dance floor to compete.”

Iverson's invitation of Diamond Johnson continues the incredible work and honors the legacy of both Kobe and Gianna Bryant.