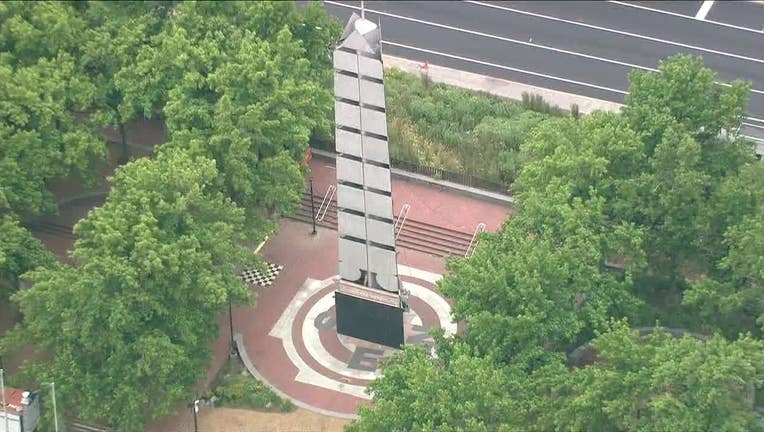 PHILADELPHIA - The base of a second monument honoring Christopher Columbus is being hidden from view while its future is debated after the explorer became a focus of protesters in Philadelphia amid nationwide demonstrations following George Floyd's death in Minnesota.

The group said the statue “fails to address atrocities committed against indigenous people" and therefore does not reflect the organization's “mission to create and maintain a safe and welcoming space for all."

The nonprofit said discussions about the monument's future would involve the city and other stakeholders and could result in its removal, but until a decision is made, “the base of the monument will be covered in an effort to protect public safety, reduce continued pain and to act as a platform for meaningful engagement."

The 106-foot Robert Venturi-designed work constructed in 1992 is “a reimagined obelisk" topped by a weather vane representing the colors of Italy, the country of the explorer's birth, and Spain, the country for which he sailed. It also was intended to represent “the role that all immigrants played in shaping Philadelphia and the United States, according to the nonprofit group's website.

Earlier, city crews built a wooden box around a statue of Columbus in south Philadelphia following clashes between protesters and residents as Mayor Jim Kenney announced a process to decide its future.

In Philadelphia, a city with a deep Italian heritage, supporters at the statue said they considered him an emblem of their heritage. The mayor said Columbus had been venerated for centuries as an explorer but had a “much more infamous” history, having enslaved indigenous people and imposed punishments such as severing limbs or even death.

Statues of Columbus were earlier removed in nearby Camden, New Jersey, and Wilmington, Delaware. In Richmond, Virginia, a statue of Christopher Columbus was torn down, set on fire and thrown into a lake. On Friday in Columbia, South Carolina, the first U.S. city named for Columbus, a statue of the explorer was removed after it was vandalized several times, and a vandalized statue in Boston also was removed from its pedestal.

Floyd, who was black, died May 25 after a white Minneapolis police officer pressed a knee into the unarmed and handcuffed man's neck even as he pleaded for air and stopped moving.